The 2020 Nobel Prize in Chemistry has been awarded jointly to European Academy of Microbiology (EAM) member Emmanuelle Charpentier (Max Planck Unit for the Science of Pathogens, Berlin, Germany), and Jennifer A. Doudna (University of California, Berkeley, USA) for “for the development of a method for genome editing”. 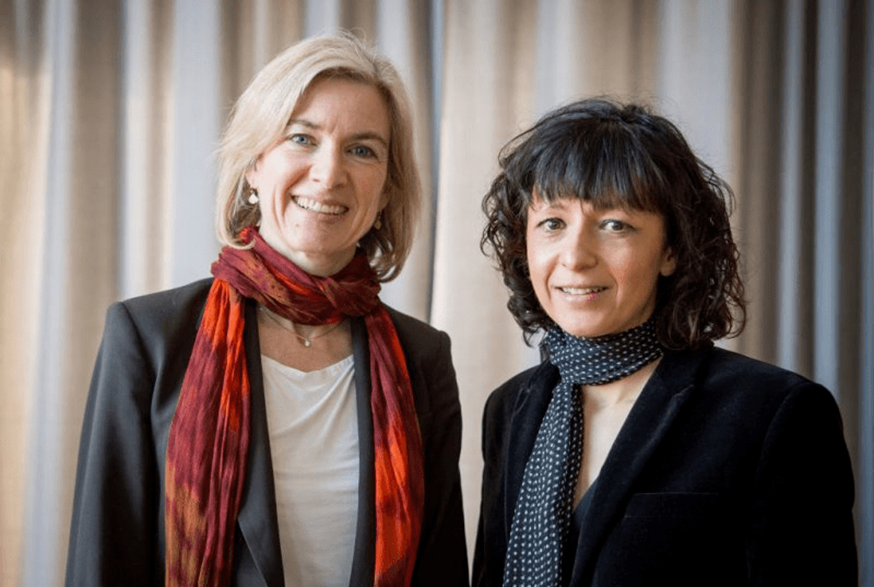 Doudna and Charpentier are the first all-female recipients of the Chemistry Prize. Emmanuelle Charpentier is a French biochemist, microbiologist, and geneticist, recognized as a world-leading expert in regulatory mechanisms that direct processes of infection and immunity in bacterial pathogens causing diseases in humans. In 2011, she published a landmark article in Nature describing tracrRNA as a key component of the CRISPR-Cas9 system and demonstrating further the role of tracrRNA in the activation of the defense system in the human pathogen Streptococcus pyogenes and other bacterial species (Deltcheva et al., 2011). Jennifer Doudna is an American biochemist, molecular biologist and geneticist and Professor and Chair in the Department of Chemistry and the Department of Molecular and Cell Biology at the University of California, Berkeley. Emmanuelle and Jennifer first met at an academic conference in Puerto Rico and, in 2012, together reported in a landmark article in Science how the bacterial protein Cas9 guided by the duplex tracrRNA-CRISPR RNA can identify targets in the invading DNA. They also described how the system could easily be programmed and re-purposed to edit any DNA target of interest (Jinek et al., 2012).

These ground-breaking findings revolutionized the field of life sciences, offering a tool for the researchers to cut DNA with great precision and to edit, correct and rewrite DNA in multiple organisms. At the beginning of 2013, scientists published the successful use of the CRISPR-Cas9 technology for gene editing in a variety of prokaryotic and eukaryotic organisms, ranging from bacteria to flies, fish, mice, plants, and human cells.

CRISPR-Cas9 has improved the speed, efficiency and flexibility of genome editing at an unprecedented pace. This new tool is now used in molecular biology laboratories around the world and has the potential to revolutionize medicine by paving the way to finding new forms of treatment for currently incurable diseases. This new understanding enables researchers to rapidly model human disease genes in the laboratory, accelerating the search for new drug leads and opening new doors for the treatment of human genetic disorders. These same features also call for extreme care in employing this novel technology, highlighting the need for continuous exchange of information between research scientists and policy makers for avoiding the risks involved in careless use of these unprecedented research tools. It is hoped that in the future, the CRISPR breakthrough may lead to the development of innovative treatments for disease and aging.

On hearing the news of being awarded the Nobel Prize for Chemistry, Emmanuelle said “my wish is that this will provide a positive message to the young girls who would like to follow the path of science, and to show them that women in science can also have an impact through the research they are performing”.