Science can be elegance 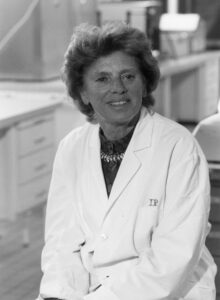 It is with immense sadness that we learnt that Agnès Ullmann passed away at the age of 91 on 25 February 2019.

She was an eminent EAM member, elected and involved from the onset of our Academy.

Agnès received her PhD in Microbiology in Budapest where she inherited the great Hungarian tradition of excellence in biochemistry. As the political situation in her country became irrespirable for free minds and oppressive for scientists in the fifties, she moved to Paris in 1958 to work with Jacques Monod, François Jacob and Elie Wollman at Institut Pasteur.

In the scientific effervescence that prevailed in this period that saw the emergence of molecular genetics, Agnès made several pioneering discoveries in deciphering key properties of the promoter of the lactose operon, in elucidating the allosteric properties of muscle-specific proteins and the role of cAMP in bacteria. For all of those like me who learned bacterial genetics in the following years, particularly at Institut Pasteur, she was the mother of alpha-complementation in the enzyme beta-galactosidase. Indeed this technique revolutionized gene cloning, but for us it was more than this. It revealed that a well-conceived model, supported by a simple and limpid technique, could reconcile beauty and scientific efficiency. It is this sense of ´belle manip’ (beautiful experiment) that propelled us with enthusiasm into microbial genetics. Science can be elegant, Agnès was the personified elegance.

She then moved from the world of model microorganisms like Escherichia coli to the world of bacterial pathogens and became a world leader in the Bordetella pertussis adenylate-cyclase toxin.

Agnès Ullmann was CNRS ‘Directeur de Recherche’, head of the Unit ‘Biochimie des interactions cellulaires’. She was at a time Director of Research applications of Institut Pasteur.

However, beside this relentless dedication to science and to her institution what will, I believe, remain in our heart is her unlimited dedication to young scientists. I have been lucky to be one among the many she took under her wings from the time of the ‘Grand Cours’ where she supervised hand-on studies, throughout their career. Having Agnès on your side was both securing and stimulating. Like no-one she entertained the ‘legend’ of the golden fifties-sixties and the heroes that founded modern genetics regardless of their nationality and institutions.

It is only recently that she discontinued her visits on the Institut Pasteur campus. She was losing sight and did not wish to expose the ravages of aging. Elegance as always…