Home   An EAM Celebration of the Father of Molecular Microbial Pathogenesis: A European Tribute to Stanley Falkow

An EAM Celebration of the Father of Molecular Microbial Pathogenesis: A European Tribute to Stanley Falkow

On May 28-29, 2019, the European Academy of Microbiology (EAM) sponsored a Microbial Pathogenesis Symposium that took place at the Institut Pasteur in Paris, France, with European and international participants paying tribute to the life and career of renowned microbiologist Stanley Falkow (1934-2018).

EAM President and event co-organizer Philippe Sansonetti opened this European Tribute to the Life and Career of Stanley Falkow by acknowledging FEMS Director of Research & Publications Patrik Bavoil for his considerable work in organizing the event, as well as the Institut Pasteur, the EAM and FEMS (the Federation of European Microbiological Societies), for promotion and financial support.

Former trainees and others whose career in research had been greatly influenced by Stanley Falkow, including several EAM members, gathered to present their current research, showing the breadth and permanence of his scientific legacy. The event was also an occasion to remember and celebrate his passion for teaching and mentoring. Aside from his scientific legacy, the personal impact he left was evident from the many memories shared by the participants. 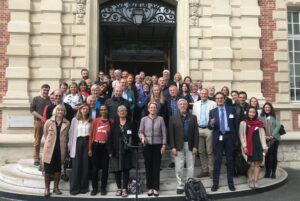 Starting from the “Bread and Butter” opening section, the diversity of topics presented was remarkable, ranging from the pathogenesis of Listeria, the impact of vaccines in the antimicrobial resistance era, the origin(s) of leprosy, riboswitch-mediated antimicrobial resistance, ecological Koch’s postulates, out-of-control Ebola virus in the Congo, and more. As noted by Pamela Small, session chair, this diversity is possibly reflected by Stanley’s approach to assign distinct projects to his students and postdocs to discourage competition and foster collaboration; a courageous stance – today as then – in the hypercompetitive environment of scientific research, where occasionally even competition within a lab is encouraged.

Personal stories – some of which were told over dinner and beers – ranged from touching to the funny and whimsical. Some remembered how Stanley’s mentorship and support had been crucial for their careers. Others pointed out at his humour and penchant for political incorrectness.

All participants of the European Tribute to the Life and Career of Stanley Falkow testified a great sense of loss. Although not all participants were direct collaborators or students of Stanley, all were influenced by his work and personality. An unparalleled achievement, given the attendees’ exceptional renown in their fields. With Stanley’s own words: “My professional life can be summarized by a quote from the Talmud. ‘Much have I learned from my teachers, more from my colleagues, but most from my students.’ It is the fortunate professor who learns from the student.’’ [1]