Due to the diffraction of light, traditional fluorescence microscopy cannot be used to resolve features that are less than 200 nm apart. Single molecule localisation microscopy circumvents this diffraction limit by exploiting special photophysical properties of fluorescent molecules (or fluorophores). These are tagged to proteins of interest within cells thus allowing their locations to be visualised.

Using fluorophores with distinct “emitting” and “non-emitting” states is the key to single molecule localisation microscopy. Some fluorophores have an inherent ability to switch stochastically between the two states, while others are encouraged to their emitting state by controlling the power and wavelength of the imaging light source.

In both cases, the aim of every single molecule localisation microscopy experiment is to have only a small subset of fluorophores emitting photons simultaneously in any one cell. As neighbouring fluorophores transition to non-emitting states, individual molecules within densely-packed clusters can be localised at different points in time. An image of initially non-resolvable molecules can therefore be reconstructed by mapping the separate localisations from the sample.

Crucially, the localisation precision of an individual fluorophore is in the order of tens of nanometres. Hence, single molecule localisation microscopy determines the positions of molecules at resolutions approximately 10x greater than conventional fluorescence microscopy.

This approach has revolutionised the way we image bacteria. Note, that cellular machinery and architecture is crowded into volumes just a few microns in size.

As such, single molecule localisation microscopy made it possible to observe structural proteins such as the FtsZ-assembled Z-ring and PopZ nanodomains at resolutions high enough to estimate their shapes and sizes. This technique also paved the way for in-depth investigations into the cycle-dependent nature of these nanostructures.

For structural studies such as those above, cells need to be fixed before imaging to prevent any motion artefacts in the final reconstruction. However, fluorophores can stay in the emitting state for several seconds which allows them to be tracked within a cell. Hence, photoswitching properties of fluorophores have been used in live cells to study the intracellular movement of proteins of interest.

For example, DNA base excision repair and DNA mismatch repair proteins become transiently immobilised as they bind to DNA. Thus, accumulating and averaging small snapshots of their movements are particularly useful to study their repair functions.

Single molecule tracking experiments can then be used to resolve the distinct slow-moving and fast-moving populations within a single protein species.  These give clues about the binding kinetics of the repair proteins and even hint at the number of DNA damage sites in cells. 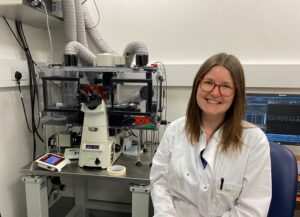 Dr Amy Moores is a Postdoctoral Research Associate in the Department of Biochemistry at the University of Oxford. With an academic background in Physics, Amy is a self-professed microscope fanatic with experience in developing novel microscopy techniques and correlative workflows. She has recently joined the group of Dr Stephan Uphoff, where she is helping expand single molecule fluorescence microscopy capabilities for quantifying various molecular processes in bacterial cells. Her current work focuses on the single molecule tracking of proteins involved in the DNA repair pathway in live E.coli cells.