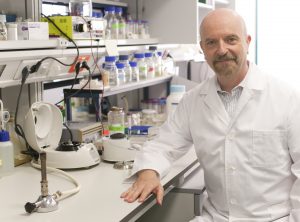 Professor Victor de Lorenzo is a member of the European Academy of Microbiology (EAM). The EAM is a leadership group of around 130 eminent microbiology experts who came together in 2009 to amplify the impact of microbiology and microbiologists in Europe. He is a lead researcher within the Systems Biology Program at the Centro Nacional de Biotecnología (CSIC) in Madrid. His current research focus involves deep engineering of soil bacteria both as cell factories for industrial biotransformations and as agents for environmental bioremediation and valorisation of toxic waste. Other areas of research include environmental microbiology, metabolic engineering, Pseudomonas putida biology and biotechnology, gene expression regulation, synthetic (micro)biology, and global warming.

Would you explain your current line of research?

The workhorse and experimental system par excellence in our laboratory is the Gram-negative soil bacterium and plant-colonizer Pseudomonas putida, in particular the strain called KT2440. However, we are not as interested in the lifestyle of this bacterium in its natural niches as its awesome physiological strength and stress-tolerance properties. We try to domesticate and repurpose these features with a biotechnological aim using the tools of contemporary synthetic biology.

While Escherichia coli constitutes an optimal model in biology, many reactions and processes of environmental and industrial interest proceed with the accumulation of toxic intermediates that E. coli can hardly cope with. In contrast, P. putida seems to fulfil nearly all conditions required in an ideal cell factory, as this bacterium adapts easily to very different physicochemical and nutritional niches. It is also well equipped to endure both endogenous and exogenous stresses. The origin of such heftiness is to be found in its central biochemical network, which is well geared to produce the metabolic currency required to overcome all types of physical and chemical insults. Our starting point is thus a natural bacterium that we have tried over the years to tame for our own sake and to redesign in many different ways.

What has been the most unusual or surprising finding in this work?

Jacques Monod used to quote that what is true for E. coli is true for an elephant. Our experience with Pseudomonas tells us just the contrary: it is often difficult to even find two bacteria that run the same functions with exactly the same mechanisms. Microbial diversity is immense and every bacterium seems to be special.

What has been the most challenging aspect of your current research?

We are very focused on the development of new genetic technologies for deep genetic engineering of Pseudomonas. I use to quote Abraham Lincoln: “Give me six hours to chop down a tree and I will spend the first four sharpening the axe.” We spend much of our time ‘sharpening the axe’, but once you have it ready … oh boy, then nothing can stop you! When I started to become interested in P. putida, there were very few tools available. After a decade of sustained efforts, P. putida is as manageable – and in many cases, more powerful – than E. coli.

What aspect of your research do you most enjoy?

I am an application-minded researcher. We use our tools for a large number of in-house projects and we love it when other labs adopt them as well. For example, our SEVA (Standard European Vector Architecture) collection, which was created in 2013, has been used by hundreds of labs around the world and has thus far accumulated over 100 citations.

What are your future hopes for this work?

My long-term research interests stem from the ideas that flourished for one decade (late 1980s to late 1990s) regarding the engineering of designed microorganisms for environmental release as agents for bioremediation of chemical pollution. By that time, potential targets were limited to specific contaminated sites. The field of bioremediation based on genetically designed agents to deal with all these compounds raised a considerable interest for some time; however, the complexity of the challenge, the lack of good success stories, and the general anti-GMO context, brought the field to a standstill. In the meantime, the dimension of anthropogenic emissions and their consequences has revealed itself to be a phenomenal planetary problem. Now is really the time to revisit the bioremediation agenda and expand it towards large-scale ecosystem bioengineering. This involves an unprecedented challenge that goes far beyond the classical concept of bioremediation, which is traditionally conceptualised as the mere removal of pollutants from given sites with biological agents. Instead, I envision a more ambitious goal that will require novel engineering perspectives and a highly interdisciplinary research agenda with the global environmental microbiome at its core, exploiting the power of systems and synthetic biology.

Coming from a chemistry background, it appeared to me back in the late 70s that the only microbe worth tackling for molecular biologists was Escherichia coli K12, including its phages and its plasmids. Bacillus was still a curiosity, yeasts merely a source of enzymes, and the rest of the microbial world mostly names from Bergey’s Manual – attention-grabbing only to clinicians and naturalists. E. coli K12 and phage lambda remained for many years the top stars of the list of experimental systems for addressing key biological questions. During that golden age, a large number of scientists were convinced that E. coli K12 held all the secrets of the biological universe and thus other microbes and other experimental organisms could basically be ignored. This E. coli ecstasy came abruptly to an end by the mid-80s. Novel experimental systems emerged rapidly as molecular tools became available for examining not only other microbes of reference (Bacillus, Pseudomonas, Streptomyces, several yeasts) but also higher organisms (mouse, Caenorhabditis elegans, Arabidopsis), where a wealth of biological phenomena could be properly addressed. In a few years, numerous microbiologists felt that their work was losing ground and not a small number of them migrated to what appeared to be more complex systems.

Those remaining in the field of microbiology often felt (not without a degree of paranoia) that our molecular biology colleagues despised our work as too undemanding and not of sufficient general interest (a typical argument for rejection of microbiology-related papers in high-profile journals!). But things were still moving and, also since the mid-80s, suddenly microbes other than E. coli started to be highlighted from entirely new angles: their aptitude to execute extraordinary chemical reactions in the test tube and in the environment, their ability to promote or inhibit plant growth and, most important (for us!), their molecular interplay with their eukaryotic hosts. Moreover, these areas of study were emerging alongside evidence of exuberant microbial life in extreme environments and the uncovering of the molecular intricacies of the archaeal word.

More recently, comparative microbial genomics is providing an entirely new perspective on how biological complexity is built. Little by little, microorganisms are leaving behind their status as mere model systems or cell factories and becoming a genuine source of pivotal biological questions which belong to the core of modern molecular biology. I am thus happy that I never succumbed to the lambda syndrome (the fear and chagrin of not being sufficiently valued because of working with prokaryotes), since I am convinced that microbiology has never being as exciting as it is developing at the turn of the millennium.