The development of cell walls was a vital step in the early evolution of life approximately 4 billion years ago. Cell walls likely increased the ability of early microbes to conquer new environmental niches, leading to an enhanced diversification of microbial life. One of the great unanswered questions in evolutionary biology is how the bacterial and archaeal classes of microbes separated into the two distinct types and thus domains. The research article “Archaeal pseudomurein and bacterial murein cell wall biosynthesis share a common evolutionary ancestry” published in FEMS Microbes aims to helps answer part of this question by analysing their cell wall synthesis. Ron Ronimus explains for the #FEMSmicroBlog how investigating the archaeal cell wall sheds light on the origins of archaea and bacteria. #FascinatingMicrobes

About bacteria and archaea and their cell walls

Bacteria contain a cell wall composed of murein (also termed peptidoglycan). Its synthesis has been intensively studied for over 50 years due to its importance in antibiotic research.

In contrast, and significant from an evolutionary perspective, archaea do not possess a murein cell wall, but instead, possess a variety of different cell wall types. This in itself suggests that the development of cell wall synthesis pathways evolved independently in the two microbial domains.

One archaeal cell wall type, pseudomurein, is a structural analogue of murein. It also contains a carbohydrate backbone and a cross-linking peptide but differs in the amino acids that form the peptide as well as the nature of the bonding and sugar type.

The archaeal cell wall pseudomurein is a structural analogue of the bacterial murein with a different composition.

Pseudomurein has a very limited distribution amongst archaea, only found in some methanogens like Methanobacteriales and Methanopyrales. The apparent differences in biosynthesis and chemistry of pseudomurein, compared to murein led to the idea that their pathways arose independently.

About the similarities between murein and pseudomurein

The research article “Archaeal pseudomurein and bacterial murein cell wall biosynthesis share a common evolutionary ancestry” published in FEMS Microbes indicates that the evolutionary history of murein and pseudomurein is closer than expected. The study relies on evidence from gene clusters, taxonomic distribution and phylogenetic analyses and the first structure of a pseudomurein peptide ligase.

The study confirms 13 bacterial murein biosynthesis enzyme homologues in the genomes of pseudomurein-containing methanogens. The 13 genes, or their most-probable precursors, are likely to have all been present in the Last Universal Common Ancestor (LUCA).

The most interesting finding was the first description of the structure of an archaeal pseudomurein peptide ligase from Methanothermus fervidus. It reveals that the protein possesses a three-domain tertiary structure similar to bacterial murein peptide ligases. The similarity of the tertiary structures, the individual domain folds and active site features between the two homologues indicate a similar catalytic mechanism and a shared evolutionary history.

About the origin of pseudomurein

Like any pathway, the pseudomurein pathway cannot have arisen all at once. It likely emerged through the combination of preexisting components, potentially with the aid of several methanogen de novo-generated genes.

There is an evolutionary relationship between archaeal pseudomurein peptide ligases and those in bacteria that synthesize the murein peptide.

The overall findings suggest that virtually all the enzymes needed to produce cell wall polymers containing a glycan backbone and amino acids were present in microorganisms close to the time of the divergence of bacteria and archaea. The cross-linking peptides are suggested to consist mainly of glutamate, alanine, glycine and aspartate with a structural rather than catalytic function. One could view this as part of an emerging cell wall synthesis capability. 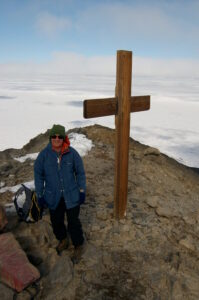 Ron Ronimus obtained his PhD at the University of Waikato and is now a principal scientist at AgResearch (both in New Zealand) and has worked with archaeal microorganisms and their enzymes for over 30 years. Current research by his local team mostly focuses on trying to develop inhibitors for controlling methane emissions which has involved collaborators at several New Zealand and overseas universities.