The genetic information of a microbial community – known as the metagenome – provides a glimpse into the genetic potential of microbes in their natural environment. Additionally, genomic traits, such as genome size and GC content can provide valuable information about the function and life-strategy of bacteria in such a community. The study “Variation in genomic traits of microbial communities among ecosystems” published in FEMS Microbes analyzes these traits from available metagenomes from different microbial communities. Pete Chuckran explains for the #FEMSmicroBlog how understanding bacterial genomic features helps us comprehend the interplays in ecosystems. #FascinatingMicrobes

Why we need to learn about genomic traits

The metagenome of a microbial community specifies what that community is physiologically capable of. Yet, it is genomic characteristics that may indicate growth rates and population dynamics of organisms in that community.

Genomic traits include the number of regulatory genes and 16S rRNA gene copies, the GC content – the proportion of DNA that is either guanine or cytosine – and genome size. These define how a microorganism can cope with environmental conditions. For example, nutrient-poor conditions often select for genomic traits that reduce the cost of reproduction.

Genomic traits define how a microorganism can cope with environmental conditions.

Much of this information has been derived from isolated bacteria and less is known about how these traits are distributed among microbial communities. This is a potential missed opportunity to contextualize metagenomic results.

Studying human communities offers an analogy. If we wanted to understand how a city functions, we could make inferences by collecting the name and occupation of every resident. However, analyzing another layer of traits in the city, such as the average per capita income, average rent for an apartment or size and construction of buildings could strengthen those inferences and unlock new insights. Similarly, we can contextualize taxa and gene abundance data of microbial communities with the structural elements of their genome.

The results indicate that each system is characterized by distinct relationships between genomic traits. These connections may be related to selection pressures unique to their environments.

Each ecological system is characterized by distinct relationships between genomic traits.

For example, for marine environments, the study shows a positive correlation between community-averaged genome size and GC content. This reflects genomic streamlining relationships that have been observed for individual bacterial species in the ocean.

A similar relationship was found for communities collected from thermophilic environments. Although here, the relationship was likely driven by the abundance of small archaeal genomes. Still, the GC content was higher overall in thermophilic communities, which potentially could be due to the increased thermal stability of the triple-bond in GC base pairs vs the double-bond in AT pairs.

On the other hand, soil environments showed a unique relationship between genomic traits. The GC content and average genome size of a community was negatively correlated. This inversion of previous findings for marine environments raises new questions about how environmental forces shape genomes in soil bacteria.

These findings suggest that soil communities likely conserve carbon in their genome. Soil bacteria are generally considered to be limited by carbon and the AT base pair is more carbon-rich than the GC base pair. Accordingly, soil communities in carbon-poor environments, such as deserts, tend to have smaller genomes with a high proportion of GC base pairs.

Another interesting relationship is the abundance of specific transcription factors with the genome size of bacteria in each environment. For example, in oceans, the abundance of the gene fliA, which controls flagella biosynthesis, was greater in communities where genome sizes were larger. This indicates an increased ability for motility in ocean microbial communities. 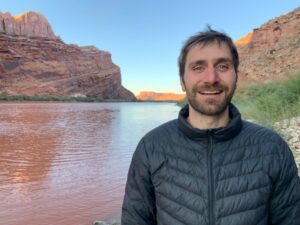 Pete Chuckran is a PhD Candidate at the Center for Ecosystem Science and Society (ECOSS) in the Department of Biological Sciences at Northern Arizona University. His dissertation focuses on how growth and stress in soil microbial communities may be detected via metagenomics and metatranscriptomics. Pete’s work seeks to understand how nutrient availability influences microbial life-strategy, and how these strategies are embedded in the DNA and RNA of soil microbes.