The archaellum is the motility system of archaea and much research has been done to investigate this unique organelle. The review “A Comprehensive History of Motility and Archaellation in Archaea” in FEMS Microbes covers all aspects of research into the archaellum from a historical perspective, including early discoveries often omitted in shorter, focused reviews. The authors present for the #FEMSmicroBlog historical milestones on the topic. #FascinatingMicrobes

This historical timeline of the review “A Comprehensive History of Motility and Archaellation in Archaea” published in FEMS Microbe begins with century-old studies on motility in halophilic organisms. Back then, prokaryote was synonymous with bacteria and the motility organelle of these halophiles was thought to constitute just another example of flagella.

In 1977, Carl Woese triggered a paradigm shift and proposed the three-domain tree of life. However, realising the difference between bacteria and archaea did not immediately imply that their motility systems would differ significantly too.

Targeted studies of archaeal motility in the 80s highlighted some unusual features of archaella. For example, archaella filaments were shown to be consistently thinner than their flagellar counterparts. It was also during this time that archaella were observed in hyperthermophiles. These are organisms that live optimally at temperatures above 80 °C.

We now know that archaea are found everywhere from the most mundane to the most extreme environments. However, at that time archaea were mostly regarded as a group of organisms with a strange tendency for harsh environments. It came then as no surprise that the motility structure of archaea differed a bit from flagella as it had to adapt to extremes of temperature, pH, and salinity. Or so was the thought at the time.

Archaella and flagella are unrelated structures, so that the name ‘archaeal flagella’ was abandoned for ‘archaella’

During the 90s, evidence for the idiosyncratic nature of archaella accumulated. Archaellins – the monomers that form the archaella filaments – were shown to be synthesised as preproteins. This was not observed in flagella, but it was surprisingly similar to how bacteria form the filaments of type IV pili (T4P).

This evolutionary link between T4P and archaella would later become a common theme in archaella research. Hence, it started to be increasingly difficult to sustain that both bacteria and archaea have flagella, with the latter possessing flagella adapted to extremes.

In 1996 the first review on archaella was published, in which the authors proposed a T4P-like model for its assembly. The same year delivered the first archaeal genome and, with it, the end to the idea that archaea and bacteria are propelled by the same kind of structure.

Despite being motile, the thermophilic archaeon Methanocaldococcus jannaschii does not encode any homologue of genes that are involved in bacterial flagellation. Hence, logic dictated that the archaeal motility system is encoded by other, different genes.

These genes were found in the 2000s from studying several genetic systems in model archaea including Sulfolobales, Methanococcus, Halobacterium and Haloferax. All those systems resulted in a decade rich in discoveries about the genetics of the archaellum. It was also during the 2000s that the first filament structure was published, as well as other important mechanistic discoveries such archaella rotation depending on ATP hydrolysis.

In 2010 it was inescapable that archaella and flagella were unrelated structures. “Archaeal flagella” was thus abandoned in favour of the name “archaella”.

Research on archaella in the 2010s was eventful: the first atomic resolution structure of archaella proteins was solved. This provided insights into the functional role of several accessory proteins. Also, regulators of archaella expression were identified, ecological studies showed other purposes for archaella besides swimming, and biophysical investigations revealed the efficiency of this nanomachine. Lastly, biotechnological approaches suggested potential applications for this fascinating structure, owing to some of its intrinsic properties and extraordinary stability.

With this review, we celebrate all the research that went from fuzzy electron micrographs of strange halophiles in the mid-20th century to the state-of-the-art cryo-electro tomograms we know today. We provide an extensive bibliography for those already in the field and hope to pique the interest in this field for newcomers.

With this review, we provide an extensive bibliography for those already in the field, and hope to pique the interest for newcomers. 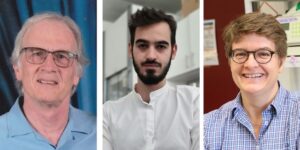 Ken F. Jarrell received his PhD from Queen’s University, Kingston (Canada) for work on lipopolysaccharide structure in Pseudomonas aeruginosa in 1980. Following, he worked as a Research Associate at the National Research Council in Ottawa on various aspects of methanogen physiology and structure before being recruited to the Department of Microbiology and Immunology at Queen’s in 1984. He has spent two sabbatical leaves as an Alexander von Humboldt Fellow in the Department of Molecular Genetics, Phillips University in Marburg (Germany) and a third sabbatical at the University of York, York (UK) as a Leverhulme Visiting Professor. He has worked on various aspects of methanogen surface structures including S layers, pili and mainly archaella for over 30 years. After 36 years at Queen’s University, he retired in 2020 and is currently a Professor Emeritus.

Nuno Machado did his BSc in Biochemistry at the University of Minho in Braga (Portugal), where he also obtained his MSc in the same subject. He is currently a PhD student at the laboratory of Prof. Sonja-Verena Albers at the University of Freiburg (Germany). His research is focused on the cytosolic components of the archaellum motor complex.

Sonja-Verena Albers received her PhD in Molecular Microbiology from the University of Groningen (The Netherlands), for her work on sugar transport systems in Saccharolobus solfataricus. She established her own group focusing on the molecular biology of archaea in 2008 at the Max Planck Institute for Terrestrial Microbiology in Marburg (Germany). She obtained a full professorship for Microbiology in 2014 at the University of Freiburg (Germany). Her current work focuses on understanding the assembly and structure of the archaellum and other archaeal surface structures, the development of genetic tools for archaea and studies on different aspects of cell division in archaea.