Five carbon sugars (pentoses) are amongst the most abundant in nature. The article “Pentose metabolism and conversion to biofuels and high-value chemicals in yeasts” in FEMS Microbiology Reviews offers a comprehensive review on metabolism of pentose sugars in different yeast species. This is a hot topic in biotechnology, as yeast strains can use pentose sugars as carbon source to produce biofuels and other high-value compounds. The co-author of the reviews Justyna Ruchala and Andriy Sibirny summarize the article in this #FEMSmicroBlog entry. #FascinatingMicrobes

D-ribose and 2-deoxy-D-ribose are as the components of RNA and DNA, respectively, even more common and ubiquitous pentoses though not as abundant. In other words, they are constituents of all living cells.

The review has two main goals:

The review presents available data on transport, metabolism of ribose, xylose, L-arabinose as well as regulation of these processes, interaction with glucose catabolism, and construction of highly productive strains.

The review “Pentose metabolism and conversion to biofuels and high-value chemicals in yeasts” in FEMS Microbiology Reviews present the construction of biotechnologically important strains producing ethanol, xylitol, lactic acid, isobutanol, fatty alcohols, lipids from xylose. Xylose and L-arabinose are abundant in the biosphere, however, as components of heteropolymers. Pure xylose and L-arabinose are quite expensive; thus, we have to harness the metabolism of these pentoses in such a way to be able to obtain biofuels and high-value chemicals from pentose-containing sugar mixtures (most frequently together with glucose as a dominant component).

Part of the paper is devoted to reviewing literature and discussing how to reach effective co-utilization of glucose and pentoses. Material is presented separately for each pentose, however, if necessary, a comparison of several sugars is provided. Genome studies of the natural xylose metabolizing yeasts and available tools for their molecular research are presented. Metabolism of other pentoses (2-deoxyribose, D-arabinose, lyxose) is briefly reviewed.

Pure xylose and L-arabinose are quite expensive; thus, we have to harness the metabolism of these pentoses in such a way to obtain biofuels and high-value chemicals from pentose-containing sugar mixtures.

Lignocelulose and pectin are renewable feedstock which is only partially utilized. The review draws the ways for bioconversion of major lignocellulosic and pectin pentoses (xylose, L-arabinose) to biofuels (ethanol, isobutanol, lipids) and high-value chemicals which should be important for developmental strategy made by industry professionals and policymakers.

For example, polylactate is a biodegradable polymer synthesized from lactic acid. Instead of producing lactic acid with lactic acid bacteria and filamentous fungi using glucose as substrate, this substance could be produced from xylose by recombinant yeast with high yields. This should lead to decrease in lactic acid production costs. Similarly with bioproduction of the sweetener xylitol, fatty acid alcohols, isobutanol and other commodities.

Successful implementation of recombinant xylose- and L-arabinose-fermenting yeasts will be prerequisite for supplying transport sector with fuel ethanol from non-food and non-feed cheap feedstock. 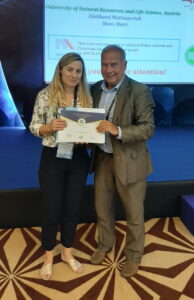 Justyna Ruchala (@JustynaRuchala) is specialized in microbial molecular genetics. She works in the field of metabolic engineering of non-conventional yeasts using these organisms as a cell factory for the production of biofuels and high-value chemicals. Her scientific work began in 2011 when she started her Ph.D. studies at the University of Rzeszow (Poland). She has found for the first time the specific role of transcription activator Cat8 in xylose alcoholic fermentation, supported by the FEMS Research Grant scheme for a stay in Institute of Cell Biology, NAS of Ukraine in Lviv. Currently she expanded her studies on the role of other transcription factors in xylose fermentation; besides, Justyna is involved in construction of the advanced thermotolerant ethanol producers from pentose sugars xylose and L-arabinose. She had sabbaticals at Lund University (Sweden), University of Natural Resources and Life Sciences, Vienna (Austria), and Bangkok Technical University (Thailand). Since 2018, J. Ruchala is the Head of the Department of Microbiology and Molecular Genetics, University of Rzeszow (Poland), were she acts as co-advisor of Ph.D. students and supervised over 13 Master’s and Bachelor’s thesis.

Andriy Sibirny works at Institute of Cell Biology, NAS of Ukraine, Lviv, and University of Rzeszow (Poland). He is a known specialist in the field of cell biology and  biotechnology of non-conventional yeasts. He is the author of 186 full-length articles, his h-index is 33 and the number of citations is over 11500 (Scopus). He was Principal Investigator of 12 grants, was the Chair of International Commission on Yeasts (2008-2012), and since 2017 is FEMS Director for Education and Public Engagements. He described several new genes (ATG26, ATG28, ATG35) involved in autophagy. He also works on flavin production and constructed effective yeast Candida famata producers of riboflavin, flavin mononucleotide, and flavin adeninę dinucleotide. Prof. A. Sibirny showed that thermotolerant methylotrophic yeast Ogataea polymorpha ferments most abundant pentose from lignocellulose hydrolysates, xylose. He also is interested in ethanol production from crude glycerol and simultaneously in glycerol production by yeast fermentation. He constructed the first anaerobic glycerol producer in the yeast Saccharomyces cerevisiae. He is also the author of one of the most efficient yeast producers of tripeptide glutathione and several important heterologous proteins including hepatitis B surface antigen and anti-cancer enzyme arginine deiminase.