Home   #FEMSmicroBlog: A free ride for microbes in the air

#FEMSmicroBlog: A free ride for microbes in the air

We can find microbes everywhere – on all kinds of natural or artificial surfaces, in places with extreme temperatures or harsh environmental conditions. But they are also in the air around us. While travelling long distances, airborne microorganisms can impact the local or global climate, agriculture but also our health. The review “Microbial ecology of the atmosphere” published in FEMS Microbiology Reviews explores the phenomenon of airborne microbes and how recent advances have shed new light on their importance to environmental and human health. Stephen Pointing explains for the #FEMSmicroBlog why we need to pay more attention to the microbes in the air around us. #FascinatingMicrobes

Microbes are everywhere – also in the air

Microorganisms are ubiquitous in terrestrial and marine habitats where they impact biogeochemical transformations and the health of animal and plant populations. One of the longest-held assumptions in ecology has been that the dispersal of microorganisms between different habitats occurs via atmospheric transport.

Indeed, with his famous swan neck flask experiment, Louis Pasteur showed that bacteria are present in the air. Shortly later, Charles Darwin described microorganisms in falling dust on the deck of the Beagle during his historic voyage.

Since 1934, environmental microbiologists have mainly adhered to Lourens Baas-Becking’s famous mantra that “everything is everywhere, but the environment selects”. This concept implied the ubiquitous transport of microorganisms in the air and suggested that observed differences in microbial diversity between locations are due to selection after deposition. However, recent research demonstrated that the relationship between microorganisms and the atmosphere is far more complex.

The mantra “everything is everywhere, but the environment selects” implies the ubiquitous transport of microbes in the air.

The review “Microbial ecology of the atmosphere”, published in FEMS Microbiology Reviews, sheds light on the hidden world of microorganisms in the air. The work aims to explain how airborne microbes impact the health and resilience of natural habitats and humans.

Additionally, the article suggests that the vital ecological processes mediated by airborne microorganisms may be under threat from pollution and climate change. This would have potentially devastating impacts on a global scale.

The journey of airborne microbes

Microorganisms are emitted into the atmosphere in vast numbers from terrestrial and marine surfaces. During their journey, they can face strong wind currents, harsh stress of UV exposure, devastating desiccation or low temperatures. These environmental conditions act like filters and only allow well-adapted microorganisms to survive this journey.

This flux of microorganisms has both positive and negative impacts on terrestrial and marine ecosystems, as described in the review. As a positive role, the airborne microorganisms can act as a kind of seed bank for colonization of new habitats.

In contrast, invasive or pathogenic species can have negative impacts on the local environment. Notably, air-mediated long-distance travel can lead to the intercontinental spread of pathogenic fungal spores to agricultural systems or human pathogens to distant populations.

Whilst in the atmosphere, some microorganisms make themselves useful by contributing to cloud formation. For example, external proteins on the cell membrane of bacteria facilitate ice formation. Notably, this process occurs independently of biological activity, so that also inactive or dead cells and cell fragments in the atmosphere can trigger precipitation.

Microorganisms may also be metabolically active and transform simple organic substrates that occur in clouds. However, an active microbial metabolism in the atmosphere is likely extremely rare and patchy. This might be mainly due to the environmental conditions and brief residence times for cells in the air.

Finally, the review considers how changes to the atmospheric habitat for microbes are triggered by anthropogenic emissions from fossil fuel combustion and dust from agriculture and desertification. Also, greenhouse gas emissions, particulate and chemical pollution may impact the transport and activities of microbes in the air.

In turn, this affects the microbe’s roles in the water cycle via the formation of clouds and precipitation. Hence, our own disruption of the microbial activities in the atmosphere ultimately has great environmental consequences on a global scale. 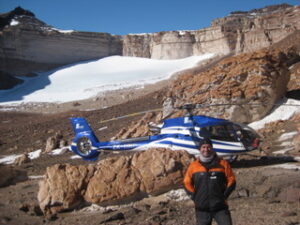 Prof Stephen Pointing obtained his doctorate from the University of Portsmouth in 1995. Since then he has lived and worked in the Asia-Pacific region and held academic positions in Hong Kong, Japan, New Zealand and Singapore. He is passionate about the microbiology of extreme environments and his research group has worked on projects focussing on the biodiversity and ecology of microbes in the atmosphere, drylands and hot springs. Stephen is particularly proud of the achievements of the many graduate students and postdoctoral fellows that have been part of the group over the years and the contributions to the empowerment of scientists in the region.