Home   #FEMSmicroBlog: Welcome to the new bacteria discovered in 2021

#FEMSmicroBlog: Welcome to the new bacteria discovered in 2021

For two years, the focus of microbiology research has been on one specific member of the viral world. While viruses make up the biggest part of the microbial world, many bacteria are a lot more helpful and more versatile in their functions. This year, lots of new bacterial species and even genera were identified and characterised–some of them with potential benefits for us. Sarah Wettstadt highlights a few newly discovered bacteria from 2021 and what we can learn from them. #FascinatingMicrobes

Myxococci are generally known as soil predatory bacteria that kill their prey by launching a massive wolf-pack-like attack. By forming huge cell aggregates, they glide over their prey and secrete lethal toxins and antibiotics. After the killing, Myxococci feed on their prey on the biological leftovers.

In the soil of a sub-tropical forest, a potential bioagent bacterium has been identified this year. The newly described genus and species Citreicoccus inhibens belongs to the Myxococcaceae family and is closely related to the predator Corallococcus exercitus.

First work shows that Citreicoccus inhibens produces fermentative metabolites, extracellular proteins as well as pyrrolnitrin with anti-bacterial and anti-fungal activities. While their mechanistic activities are not well understood yet, this bacterium is a promising candidate to use as a biocontrol agent in the agricultural sector.

For biotechnological purposes, therapeutic agents or household applications, cold-resistant enzymes represent great solutions. This is why a lot of research in recent years focused on microbes in cold areas.

One study described the novel genus and species Frigoriflavimonas asaccharolytica from the Weeksellaceae family. This psychrophilic, yellow-coloured bacterium grows optimally at 10 °C, at a pH of 6.0 and in presence of 0.5 % NaCl.

While the detailed characterisation of this strain is still outstanding, it was shown that it hydrolyses several molecules like casein, lecithin and Tween. This makes it a potential harbour of novel cold-adapted enzymes.

Another less cool-loving bacterium that was identified this year, is Methyloradius palustris. This new member of the family Methylophilaceae was detected in reddish-brown snow collected in a moor in Japan. Hence, its optimum growth was shown to be between 25 and 28 °C.

Interestingly, this bacterium utilizes only methanol as carbon and energy sources for aerobic growth and oxidizes it to formaldehyde. While this strain did not use any sugars, organic acids, amines, glycerol, ethanol or methane, it was able to reduce nitrate to nitrite.

The seaweed Agarophyton vermiculophyllum is an invasive species across the Northern hemisphere. Interestingly, scientists found a new symbiont of the seaweed that seems to provide it with metabolites and essential vitamins.

The cyanobacterium Waterburya agarophytonicola was detected as a core holobiont member. It seems that this bacterium is a master in adhering to and infecting its host due to its range of hemagglutinin, adhesion, type IV pili and heme utilization proteins. Likely in return, Waterburya agarophytonicola produces various vitamins, like B7, B11, B2, B5, B1, B12, E, K, K2, B6, that benefit the host.

Taxonomically, Waterburya agarophytonicola belongs to the family of Pleurocapsales with its closest relative being Pleurocapsales cyanobacterium. Their family members all call marine or freshwater their homes and are endolithic, epiphytic or sponge-associated species. Similarly to other cyanobacteria, Waterburya agarophytonicola forms spherical, blackish visible aggregates and reproduces by multiple fission and baeocyte production.

Welcome to the new bacteria discovered in 2021

While the focus in the past two years has been on detecting and restraining certain virus strains from our lives, researchers have also worked hard to extend our knowledge of the bacterial world.

When I first mined the PubMed database on new bacteria discovered in 2021, I had no idea just how many new species and even genera have been identified in the last 12 months (I’m talking hundreds of entries!). From the guts of animals, human throats, fermented fruit peels to soils in the Arctic and rain forest or freshwater–the sampling sites for microbial communities seem endless. Now, it is a matter of time to find out whether these fascinating new members of the bacterial world will be helpful to us. 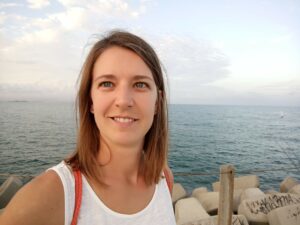