Oomycetes are fungus-like eukaryotes including pathogens like Phytophthora infestans (the agent of late blight of potatoes and tomatoes) and saprotrophs like Salisapilia sapeloensis. This latter is used as model to study saprotrophy, that is feeding on dead plant organic matter by oomycetes. A new paper in FEMS Microbiology Ecology investigates saprotrophy and plant pathogen evolution in oomycetes. By means of comparative transcriptomics, the authors highlighted genes, enzymes, and regulatory networks responsible for their different ecological lifestyles.

In this #BehindThePaper interview for the #FEMSmicroBlog, we spoke with first author Sophie de Vries who summarizes the significance of the paper to different audiences and tells how she found out that Salisapilia sapeloensis enjoys the local cuisine. #FascinatingMicrobes

Can you summarize the significance of the paper for microbiologists in a different field?

While saprotrophy has been extensively studied in fungi, we have very little molecular data on saprotrophy in oomycetes (filamentous, heterotrophic, fungus-like eukaryotes). In this study, we used comparative transcriptomics to identify the molecular signatures of oomycete saprotrophy. Despite their 1.5 billion years divergence, fungi and the here-analysed oomycetes appear to use common themes for their shared ecological strategy.

We then delved into oomycetes lifestyles and explored the differences between our particular case of saprotrophy and pathogenicity in diverse oomycetes. Here we found differences in gene expression of transcription factors and downstream candidates, such as CAZyme-encoding genes. We hypothesize that saprotrophs and pathogens use slightly altered gene regulatory networks to facilitate their different roles in the ecosystem.

Can you explain the importance of the paper to the general public?

In this study, we focused on an important group of filamentous microbes, called oomycetes. The causal agent of late blight of potatoes belongs to this group. This plant disease is well-known especially due to its dark history. While for a long time thought to belong to fungi, molecular studies decades ago have identified that oomycetes have diverged from fungi ~1.5 billion years ago.

Fungi and oomycetes not only share their filamentous appearance, but also the fact that they include both plant pathogens and those that only make a living by digesting dead plant litter—these are the so-called saprotrophs. In this study, we sought to understand which molecular underpinnings set the latter lifestyle apart from plant pathogens. We found that similar families of genes are encoded in saprotrophs and pathogens. Yet, similar to fungi, specific set of genes are important for each ecological strategy.

Here, microbe proteins that degrade the cell walls of plants play important roles. Our analyses showed that some shared genes showed different levels of activity when comparing pathogens and saprotrophs, e.g. the saprotroph used way more of a gene than eight of its (more or less closely related) pathogenic relatives. We think that not only the gene content but their usage (something also recently hypothesized for fungi) defines the role an oomycete plays in its environment.

Can you convey the fascination of the findings to kids and young adults?

Plants encounter numerous small critters, invisible to the eye, called microbes, in their environment. With most of these microbes, the plants get along just fine. But some of them can make the plants sick. How these microbes make a plant sick differs from microbe to microbe. The reason can likely be found in their hereditary material—their genes encoded on their DNA.

In the end, some of the plants unfortunately lose to these pathogens. When a plant dies, by natural causes or because it got sick, other microbes eat the dead plants. By this the microbes bring the nutrients encased in the dead plant back into the natural cycle. An example are forest fungi that degrade deadwood. These specific microbes are called saprotrophs. Hence, both pathogenic as well as saprotrophic microbes eat plants.

We asked ourselves, ‘What are the difference on the level of molecules between these two strategies?’ The molecules we were interested in are defined by genes and often appear in large families in an organism’s DNA. In our research we observed that indeed families of similar genes are present and active in pathogens and saprotrophs alike during the interaction with plant material.

Yet the differences lie in the detail. First, saprotrophs and pathogens often have different members of the same gene family and second, if in a pathogen and a saprotroph the same member of a gene family is present, these corresponding members are activated differently in the two different types of organisms. Thus, what makes organism different is not only in its DNA, but also how the information stored on the DNA is used.

Is there a (personal) story behind the paper? I.e. what lead you to pursue these results, something unexpected, your personal/scientific journey,…

Oomycetes are astoundingly diverse. They can infect various different plants, including many of the crops we eat. One of the best known and most devastating oomycetes of crops is the late blight pathogen, Phytophthora infestans, that infects and destroys potatoes and tomatoes. During my PhD I focused on this pathogen. I tried to understand the differences in the immune response of wild and cultivated tomatoes toward P. infestans.

Yet, it is not only the plant side that determines whether an interaction with an oomycete and its host ends-up being pathogenic. Cumulating research highlights many factors—from abiotic and biotic factors, such as environmental stress on the plant or other microbes, to the genetic make-up of the plant and microbial species themselves that together determine the outcome of plant–microbe interactions.

I became interested in the diversity of life strategies in oomycetes and asked whether these differences are mirrored in the usage of the genetic code of the organisms. So, I started my postdoc in Halifax, on Canada’s East Coast, supported by an Izaak Walton Killam Postdoctoral Fellowship, to work on an oomycete that was discovered in 2010 as a saprotroph of marsh grass, Salisapilia sapeloensis.

Marsh grass grows in abundance on the eastern coast of Canada, allowing us to establish a saprotrophic system in the lab using locally sampled marsh grass that we turned into litter by autoclaving it. Establishing this system thus was not only a joy in the lab, but also provided many great hikes trough Canada’s beautiful landscapes.

Thus, our Salisapilia was indeed enjoying the local cuisine. 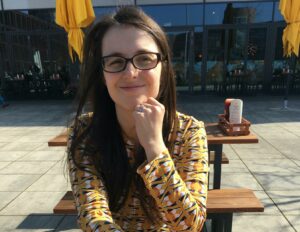 Sophie de Vries (@Sophie_de_Vries) is an evolutionary biologist with a focus on plant-microbe interaction. In her research, she studies the evolution of microbial lifestyles as well as the plant immune system, which are two of the pillars that determine the outcomes of plant-microbe interactions. Sophie received a Bachelor’s degree from the Technical University of Braunschweig (Germany) and a Master’s Degree from Uppsala University (Sweden). She received her PhD from the Heinreich-Heine-University in Düsseldorf (Germany), focusing on differences of transcriptional regulation in the plant-immune system between closely related plants. To focus on microbial lifestyle evolution, she started her first post-doc supported by an Izaak Walton Killam Postdoctoral Fellowships at the Center for Comparative Genomics and Evolutionary Bioinformatics at Dalhousie University, Halifax (Canada). After that she returned as a postdoctoral fellow to the Heinrich-Heine University Düsseldorf in Germany.

The section #FascinatingMicrobes for the #FEMSmicroBlog explains the science behind a paper and highlights the significance and broader context of a recent finding. One of the main goals is to share the fascinating spectrum of microbes across all fields of microbiology. #BehindThePaper interviews aim to bring the science closer to different audiences, and to tell more about the scientific or personal journey to come to the results.