Nitrate is one of the most common groundwater contaminants. Drinking water with high levels of nitrate can decrease our blood’s capacity to carry oxygen or increase the risk of cancer. Finding ways to remove this pollutant from groundwater is therefore of critical importance to protect human health. The research article “Presence of iron(II) and nitrate shapes aquifer-originating communities leading to an autotrophic enrichment dominated by an iron(II)-oxidizing Gallionellaceae sp.” published in FEMS Microbiology Ecology identified new bacterial species that remove nitrate with the help of iron. Natalia Jakus explains for the #FEMSmicroBlog how these bacteria can improve the quality of our groundwater. #FascinatingMicrobes

Bacteria can remove nitrate from groundwater by reducing it to harmless dinitrogen gas. To do so, the nitrate-reducing microbes require particular conditions. These include an oxygen-free – or anoxic – environment, a neutral pH and an organic carbon source.

Groundwater is stored beneath the Earth’s surface in porous rock layers. These water-saturated layers, called aquifers, are often composed of sedimentary rocks. Interestingly, some of the sedimentary rocks additionally contain crystalline structures of pyrite. This mineral, which is made of iron(II) sulfide, easily undergoes redox reactions.

When water enters such an aquifer, it brings important substrates for microbial life such as oxygen, nitrate and organic carbon. Once oxygen gets in contact with pyrite, it rapidly reacts with the mineral. Additionally, under the right conditions, some microbes, for example, Curvibacter spp., can oxidize the iron(II) using small concentrations of oxygen to gain energy.

The availability of substrates changes the game

After oxygen has been consumed, nitrate-eating microbes become active and start reducing nitrate. As long as organic carbon is available, common nitrate-reducers like Thauera spp. dominate the groundwater microbial communities.

The co-presence of dissolved iron(II) in addition to organic carbon causes a dominance of Acidovorax spp. within the microbial community. Interestingly, Acidovorax spp. were recently shown to utilize both these substrates to reduce nitrate.

But what happens to the microbes if organic carbon is not there? Can they still remove nitrate?

Without organic substrates, nitrate-reducing microorganisms solely rely on inorganic molecules like iron(II) from the abundant pyrite. This suggests that they would have to couple nitrate reduction to iron(II) oxidation in groundwater and fix inorganic carbon to produce biomass.

Yet, culture-based evidence and thus the identity and genetic features of key bacteria involved in this process was missing until recently. Why is learning about these microbes so tricky?

In the ’90s, researchers obtained the first nitrate-reducing bacterial culture that grew only on iron(II). The culture originated from a pond and consisted of several bacterial species.

Even though their metabolisms are likely energetically beneficial for microbial cells, isolating a single strain from the culture was unsuccessful. Nevertheless, this discovery confirmed the existence of nitrate-dependent iron(II) oxidation.

Even though nitrate-dependent iron(II) oxidation should be energetically beneficial for microbial cells, isolating such microbes was difficult.

It was further assumed that in environments limited in organics, such as aquifers, iron(II) oxidizers would play a crucial role in nitrate removal. Yet, it took over two decades (!) to obtain a nitrate-reducing iron(II)-oxidizing culture.

On the hunt for the most whimsical rock-eating microbes

The research article “Presence of iron(II) and nitrate shapes aquifer-originating communities leading to an autotrophic enrichment dominated by an iron(II)-oxidizing Gallionellaceae sp.” published in FEMS Microbiology Ecology investigates the genetic features of such an iron(II)-oxidizing microbial culture.

The study describes a microbial community that oxidizes not only dissolved iron(II) but also pyrite and iron(II) carbonates. It consists of many bacterial species including so-far uncultured bacteria related to the Gallionellaceae family. These commonly live in the presence of micro-amounts of oxygen, raising questions about how aquifer-originating Gallionellaceae adapted to the anoxic environment.

Genetic analysis of the strains reveals that these bacteria harbor unique genetic features. They contain genes related to nitrogen, iron and carbon metabolism. These genetic traits most likely allow them to survive under anoxic conditions, produce energy and generate cells. However, the study does not identify a gene that allows transforming nitrate all the way to dinitrogen gas.

Hence, Gallionellaceae can be classified as potential key players in nitrate removal in aquifers as they link geochemical cycles of iron(II) and nitrate. Yet, the pathway to remove nitrate from groundwater is not completely clear.

Also, isolating nitrate-reducing iron(II)-oxidizing bacteria have so far been unsuccessful. This implies that microbes living in such ecosystems may be interdependent, share parts of the pathway or essential compounds with other microbes. Thus, enigmatic nitrate-reducing and rock-eating microbes are most likely out there and are just waiting to be discovered! 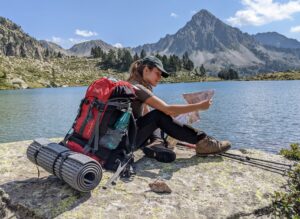 Natalia Jakus holds an Engineer degree in Geology and MSc. in Mineralogy from AGH University of Science and Technology in Kraków. She finished her Ph.D. in Geomicrobiology at the University of Tübingen where she explored the role of microbially-driven pyrite oxidation in nitrate removal from groundwater. In her research, she combines geological knowledge with microbial ecology tools to disentangle complex mineral-microbe interactions and search for the most peculiar microbes thriving in rocks.