#FEMSmicroBlog: The 'lime' of lichen symbioses

Lichens are iconic examples of symbiotic relationships. However, still too little is known about the molecules that are potentially responsible for the structural integrity of each lichen symbiosis. Spribille et al. in FEMS Microbiology Letters (2020) explain the ‘extracellular interaction matrix’ (EIM) in lichens and propose an exciting model to envision the formation of a fully developed lichen thallus. #FascinatingMicrobes

Symbioses are long-term, stable relationships between organisms from different kingdoms that have arisen the interest of uncountable scientists from many different research fields in the past decades. Symbiotic organisms have come together and developed mutualistic interactions which enable them to thrive in environments where they may not survive individually. Lichens have been iconic examples of symbiotic relationships. In lichen symbioses, two principal partners (a filamentous fungus and a population of unicellular green algae or cyanobacteria) have repeatedly evolved to form fascinating 3D structures called thalli.

Lichen thalli are true architectures, as many other microorganisms (such as other filamentous microfungi, yeasts, algae and bacteria) inhabit and thus interplay with them, either benefiting from the thallus niche (likely temporary tenants) or potentially contributing to the ecological success of the lichen itself (like valuable housemates – someone who respects cohabitation rules and pays rent regularly).

While the ecological diversity and the taxonomy of the principal lichen-forming fungi and algae have been deeply investigated up to date, much less has been known about the ‘lime’ of the thalli, i.e. those chemicals which are potentially responsible for the structural integrity of each lichen symbiosis, and which include molecular signals and extracellular metabolites such as extracellular polysaccharides. The majority of these chemicals are still unknown biopolymers that may be structurally very diverse and difficult to study. Also, determining which symbiont produces them is very difficult in vivo and even more challenging in vitro (due to difficulty of growing lichens and their symbionts in axenic or mixed cultures).

A contribution in this lack of knowledge is presented by Spribille et al. in FEMS Microbiology Letters (2020). The authors reviewed exhaustively the polysaccharide composition that is exclusively found extracellularly in the more cortical zone of the thalli, which they define as ‘extracellular interaction matrix’ (EIM). The EIM derives majorly from unicellular non-photosynthetic organisms (UNPO) coinhabiting lichens, and has been considered previously only a structural part of lichens’ cortical layer. Many substances found in this layer (as well as in the more internal parts of the thalli) have been for long considered products of the lichen secondary metabolism deriving from the principal lichen-forming fungus. Spribille et al. (2020) reviewed previous literature on EIM compounds, considering over 60 studies from the early 1900s to today.

The authors considered both microscopical and chemical studies, comprehending the whole spectrum of techniques used so far to study lichen secondary metabolites, dealing with the identification and characterization of components of lichens’ EIM. The authors clearly differentiate those extracellular polysaccharides (EPS) that are detected from the ground powdered whole lichen as dominant, those that are surprisingly missing (such as chitin!), and those that are produced by the algal partners, but which might be missing too. Also, the authors reviewed those EPS that in lichens derive either from the bacterial or from the fungal fractions, and stressed the importance of targeted, future researches aiming at uncovering the functions of individual EPS.

Ultimately, Spribille et al. (2020) propose three models for the formation of a full developed lichen thallus, taking into account the presence of different UNPO as fellow lodgers to influence the ‘give-and-take’ interactions within the entire symbiosis, and thus changes of the lichen within the environment.

The paper by Spribille et al. in FEMS Microbiology Letters (2020): 3D biofilms: in search of the polysaccharides holding together lichen symbioses is part of the Thematic Issue ‘Microbial Symbioses’. 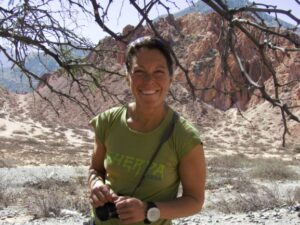 Lucia Muggia graduated in Biology at the University of Trieste and received her PhD in molecular biology at University of Graz. Since 2012 she has a permanent research and teaching position at the University of Trieste. She has been studying lichens since 2004, with particular interest on the systematics of lichenized and lichen-associated fungi and lichen photobionts. She has successfully cultured in vitro many lichen mycobionts, photobionts and further lichen associated fungi and algae, and is now studying their diversity and interactions with microscopic and molecular approaches.

This is the first in a series of blogs about science, the microbiology community and events linked to microbiology. Dr Muggia is one of the microbiologist bloggers that we found willing to share her fascination for microbes, and explain the significance and broader context of a recent finding.