Candida albicans is a fungal pathogen with the ability to cause commonly occurring vaginal yeast infections as well as life-threatening infections in people with compromised immune systems. C. albicans infections become more widespread partly because more people are now susceptible to fungi. To find better solutions, lots of research focuses on understanding the functions of single genes and thus creates huge amounts of functional data. The research article “A data library of Candida albicans functional genomic screens” published in FEMS Yeast Research now attempted to organise the current knowledge by creating a super overview of yeast genomics data. Nicholas Gervais explains for the #FEMSmicroBlog why such a clear organisation of data is important to advance the yeast research field. #FascinatingMicrobes

Within the past few decades, scientists have developed many molecular tools to manipulate the genomes of organisms like C. albicans. In particular, they have developed methods to mutate or delete individual genes to better understand the biology of this pathogenic fungus.

After mutating or deleting a gene in a fungal cell, the behaviour of the mutant strain can be compared to that of the unmodified cell. This helps predicting the function of the modified or deleted gene.

Additionally, researchers have applied molecular tools to generate large-scale libraries of genetically modified cells to study many genes at once. These libraries have been instrumental in investigating the biological functions of genes in C. albicans.

So far, several C. albicans mutant libraries have been generated that helped understand the complexity of C. albicans biology. However, as tools for genetic manipulation become increasingly available in C. albicans, there is a corresponding need to organize the massive amounts of collected data.

The goal was to collect and curate C. albicans genetic mutant library results from previously published research in a defined format. The aim was to enable access, use and comparison of this genomic screening data.

Looking at the Past can Help Guide the Future

To organise all the available data, the study mined the literature for manuscripts that performed investigations using four genetic mutant libraries. Databases from each of these manuscripts as well as a master table with all their results are now available to the fungal research community via the fungal genome database website FungiDB.

The study further normalized this data by quantitatively and comparatively analysing results from different papers. Like this, their gene functions could be pooled together to help understand the broader function of each studied gene.

Together, this unique data library of functional genomic screens in C. albicans can complement already available databases such as the Candida Genome Database. These offer qualitative descriptions of genes and genetic mutant strains. Yet, they lack quantitative data as well as normalized data to compare results from multiple manuscripts.

More and more data is made available from subsequent screens of these four mutant libraries. Hence, this new yeast genomic library will become an increasingly powerful tool to uncover functional relationships between genes and to predict the roles of uncharacterized genes.

This new yeast genomic library can become a powerful tool to uncover relationships between genes and to predict the roles of uncharacterized genes.

Learning about these genetic functions in C. albicans allows us to better understand the mechanisms that enable this pathogen to interact with human cells, establish infections or tolerate treatments with antifungal agents.

Huge amounts of data are produced from different labs around the world to better understand C. albicans with the goal to produce new therapeutic strategies. Organizing all this data can help researchers quickly identify what research has already been done and what work still needs to be performed to accomplish this goal. 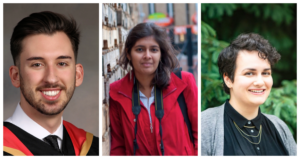 The Shapiro lab is part of the Department of Molecular and Cellular Biology at the University of Guelph (Canada). We are interested in studying microbial fungal pathogens, and we are developing and employing CRISPR-based genomic technologies to allow us to better understand the biology and pathogenesis of these organisms. Nicholas is an MSc student focusing on developing CRISPR-based tools to study the acquisition of drug-resistance in the fungal pathogen Candida albicans.