Seaweed (macroalgae) form a diverse and ubiquitous group of photosynthetic organisms that play an essential role in aquatic ecosystems. They are not only one of the most important contributors to global primary production but also are the major habitat formers on rocky shores, providing food and shelter for aquatic life. 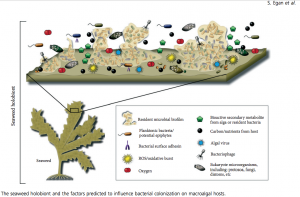 The oxygen generated via photosynthesis by the seaweed and the presence of  a source of carbon-rich constituents from macroalgal cell walls, turn the algae’s surface into a good microenvironment for a bunch of different microorganisms. Like other eukaryotic organisms, macroalgae harbor a rich diversity of associated microorganisms with functions related to host health and defense. One of this functions is to protect against secondary colonization  of the seaweed surface.  For Suhelen Egan  from The University of New South Wales, Sydney, and their team, the tight macroalgae-bacteria’s relationship and other studies suggest that macroalgae and epiphytic bacteria interact as an unified functional entity or holobiont.

The microbial makeup of these communities  is, as the Burke studies said,  largely determined by function rather than taxonomic identity. Macroalgal surfaces are often easily colonized by bacteria from the plankton, which likely contain many species with equivalent functionality that would allow them to become part of a surface-associated community. If initial colonization is by chance from a set of functionally equivalent planktonic bacteria, then final community composition will have no recognizable taxonomic pattern, yet contain consistently all the traits that are necessary for an epiphytic community to function. Once attached in this rich place, bacteria must compete with other microbial epiphytes for nutrients and space within the macroalgal surface biofilm. In such a situation, the production of antagonistic chemical metabolites (e.g. Antibiotics) would be advantageous not only for bacteria but also for the  seaweed. In adittion, bacteria are essential for normal green seaweed development therefore it is tempting to assume that AHL-signaling is a kind of “bacteria languag”‘, that may initiate the cross-kingdom cross-talk. 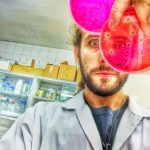