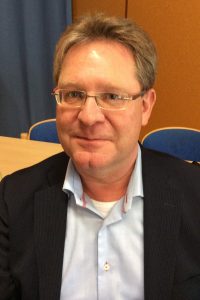 Oscar Kuipers is a member of the European Academy of Microbiology (EAM). The EAM is a leadership group of around 130 eminent microbiology experts who came together in 2009 to amplify the impact of microbiology and microbiologists in Europe.

Could you tell us about your research interests?

“We develop novel antibiotics based on modified peptide templates using synthetic biology approaches. We do this by combining the biosynthetic machinery of various modified peptide families such as lantibiotics, microcins, lassopeptides, and sactipeptides. Our work is also concerned with heterogeneity in clonal populations studied by time lapse microscopy, microfluidics and flow-cytometry.”

“There have been a number of surprising findings in this line of research. Several of the most notable include:

What has been the most challenging aspect of this project?

What aspect of this project have you most enjoyed?

“I’ve most enjoyed engineering combinations of modification machineries in one cell. This is a great challenge. We’re aiming to obtain new antibiotics that make it to clinic. I hope that our new-to-nature molecules in the natural product range will have many possible applications.”

How many people are in your research group?

“I head the group of Molecular Genetics with 55 people. 34 of these are PhD students, postdocs, and technicians, who I supervise directly. The others are supervised by my colleagues, Professor Jan Kok and Professor Jan Willem Veening.”

What is the range of academic levels represented among your group members?

“We have about 55 scientists in our group, representing 16 nationalities (50% PhD students, 25% postdocs, 15% Master students, 5% technicians, 5% staff members). We like to work in smaller teams and frequently collaborate with each other through monthly team meetings as well as more informal meetings and conversations. I always encourage collaboration.”

What is the favorite aspect of your research?

“I most enjoy the discussions with the PhD students and postdocs. The excitement when experiments show something completely novel and, of course, the final understanding of a mechanism are also highlights.”

What has been your most memorable moment in a lab (or in the field) thus far in your career?

“The final understanding of autoinduction by nisin of its own operon was a real Aha-Erlebnis. The engineering of active phospholipase mutants and their refolding from E.coli inclusion bodies was a real breakthrough too. The engineering of completely novel modified peptides which show great activity was an exciting finding as well.”

You can meet Prof. Oscar Kuipers at the Congress this July in Valencia where he will be giving a talk on novel antimicrobials. Find out more about his talk here.