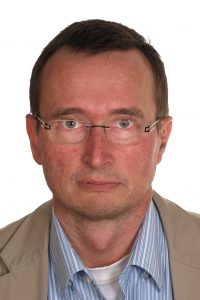 member of EAM and EMBO; guest editor for Pathogens and Disease

Peter Sebo specializes in the RTX family of toxins produced by Gram-negative pathogens. Currently, he heads a research team primarily focusing on the molecular mechanism of action of the adenylate cyclase toxin-hemolysin (ACT or CyaA) from the whooping cough agent Bordetella pertussis. His studies focus on the role of the toxin in bacterial virulence and aim to elucidate the mechanisms by the cAMP produced by the toxin suppresses and manipulates host innate and adaptive immune defences.

Peter Sebo’s team is also involved in development of immunotherapeutic CD8+ T cell-activating vaccines, where the toxoid of CyaA is used to deliver antigens into dendritic cell. His activities are also devoted to development of a next generation of pertussis vaccines. Peter also serves as a Professor of microbiology at the University of Chemistry and technology in Prague, teaching a course on ‘Molecular mechanisms of bacterial virulence’.