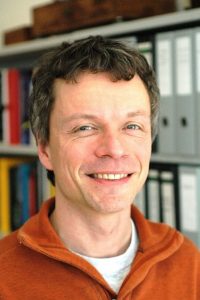 Wolf-Dietrich Hardt was elected in 2001 as a Professor for Microbiology at the Institute of Microbiology (D-BIOL) ETH Zurich. His group investigates the molecular mechanisms of infectious disease.

He completed his PhD in 1995 at the Institute of Biochemistry, FU Berlin. There, he investigated the molecular function of catalytic RNAs. From 1995 to 1997 Wolf-Dietrich joined the group of Prof Jorge E. Galan at Stony Brook, New York. During this time, he began his work on the molecular mechanisms of Salmonella infections. Afterwards he moved to the Max von Pettenkofer Institute at the Ludwig Maximilians University in Munich, Germany. There, he continued his work on Salmonella pathogenesis and established his own research group (1998-2001). In 2001 his research group moved to the Institute of Microbiology at the ETH Zurich.

Prof Wolf-Dietrich Hardt’s laboratory studies Salmonella-induced diarrhoea. This is a very common disease caused by contaminated food or water. They are interested in the molecular and cellular mechanisms that explain how this food-borne pathogen colonizes the gut, infects the gut tissue and causes disease.