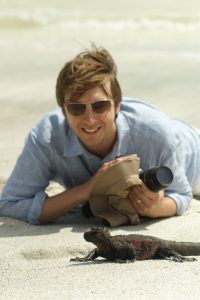 Prof Kevin Foster’s career has focused on the question of why cooperation evolves in nature, particularly in microorganisms. After a first degree at Cambridge, Kevin completed his PhD in Sheffield under Francis Ratnieks studying cooperation and conflict in social insects.

He continued in research at Rice University, USA studying the  slime mold Dictyostelium discoideum. After spending some time in Berlin and Helsinki working on evolutionary theory, he started up his own laboratory as a Bauer Fellow at the Harvard Center for Systems Biology, USA where his focus moved to more conventional microbes, in particular bacteria and yeast.

A few years ago, his lab moved to the University of Oxford where Kevin is now Professor of Evolutionary Biology in the Department of Zoology. Kevin’s lab combines theory, molecular microbiology, and evolutionary experiments to determine the rules of microbial interaction.