It has been 115 years since sulfur-producing bacteria were first reported, and this mode of metabolism has gripped microbiologists ever since.

To celebrate the diversity and the current knowledge of sulfur metabolism, FEMS Microbiology Letters has a new Thematic Issue on this topic for you to explore.

This Thematic Issue covers sulfur oxidation, reduction and assimilation, across all three domains of life, with physiological and biochemical studies sitting alongside ecological and genomic investigations.

The diversity of the sulfur community is now vast – we have groups all over the world working on sulfate reduction and sulfur oxidation; on colourless, green and purple sulfur Bacteria; on filamentous and unicellular Bacteria; on the mysterious ‘cable bacteria’; on thermophiles, halophiles, psychrophiles and everything in between… and, importantly, on virtually every sulfur (chemical) species that is known.

Explore this collection of articles, and discover the diversity of the sulfur community. This Thematic Issue is free to read until May 2017. 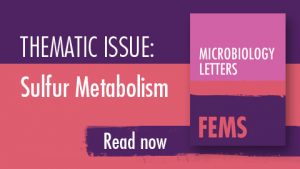