This post is guest written by our volunteer Tomasz Benedyk who writes as part of Polygeia, a student-run think tank that encompasses a large multi-disciplinary group of students in Cambridge, Oxford and London who are engaging in public policy, skilled in policy writing, and passionate about global health.

The recent Ebola epidemic in West Africa (2013-2016) has drawn scientific attention to the problem of emerging viral zoonoses. It was the largest Ebola outbreak in history, and caused over 11,300 deaths.

Ebola is a common name for Ebola virus disease (EVD), caused by four viruses from the Ebolavirus family. After initial cold-like symptoms the disease rapidly progresses, causing massive internal and external bleeding with accompanying dehydration. There are no approved vaccines or specific treatments for EVD.

Bats can be found on all continents except Antarctica; there are 4,600 species that account for as much as 20% of the total biodiversity of mammals on Earth. Bats are recognized as important reservoir hosts of many viruses and contribute to so-called spill-overs, when viruses cross species barriers and acquire the ability to infect humans and/or other domestic and wild mammals.

Bats are the most likely candidate species for the natural reservoir of Ebola.

Many of their characteristics, including hibernation, long life span, crowded roosting behaviour are thought to contribute to their susceptibility to persistent viral infections, whereas echolocation, active lifestyle and migration are pointed out as main reasons for their exceptional potential to spread viral particles 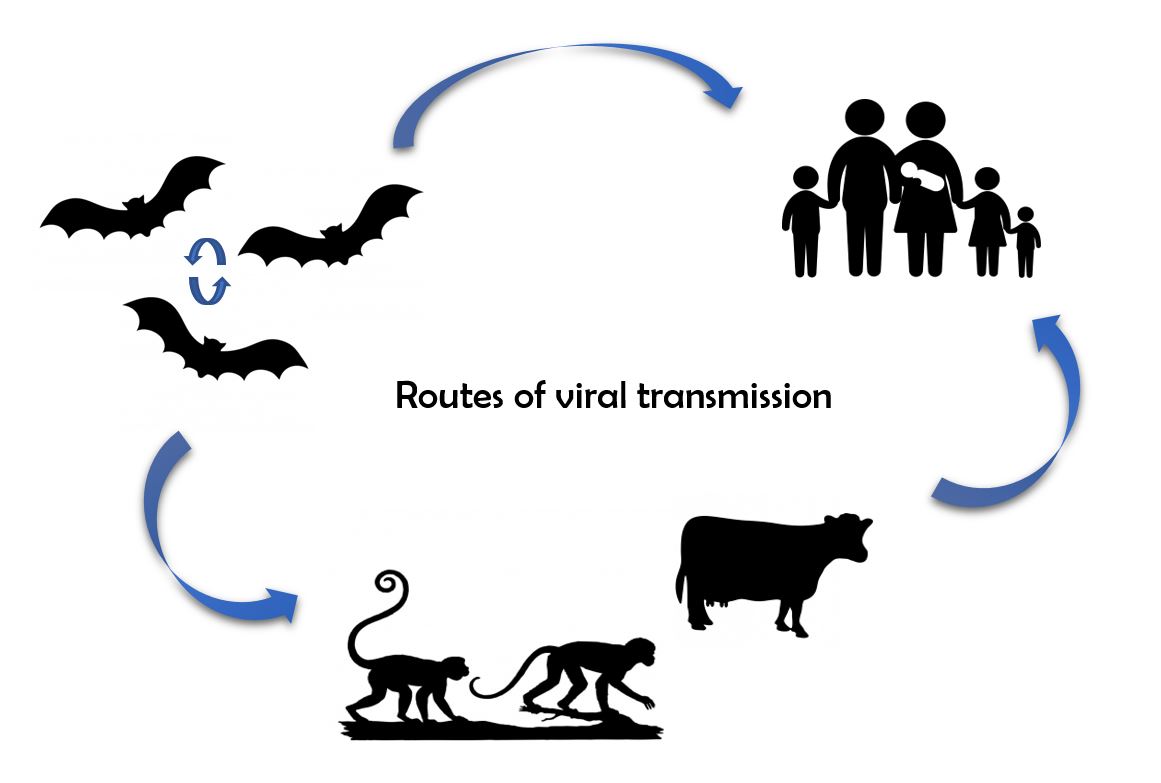 Zoonotic outbreaks are one of the biggest current challenges in which implementation of One Health strategies is crucial to ensure safety for the global community. Better understanding of animal biology and behaviour can facilitate identification of the source of these outbreaks and their transmission routes, allowing better control and more effective preventative measures.

A 2015 Lancet Commission study proposed that uncontrolled deforestation, urbanization, and climate changes all contributed to Ebola outbreak and may have similar impact on other potential zoonotic diseases in the future. These factors lead to narrowed habitats (mating and feeding areas), increasing the interaction between animals and humans, which allowed exposure to a wider variety of non-human pathogens. Moreover, urbanization promotes mobility of citizens, which may impede the containment of an outbreak and rapidly increase its range.

Eating bushmeat is one of the major risk factors for acquiring EVD – ensuring proper food security would greatly limit the need to hunt for bushmeat, greatly limiting transmission of the virus.

In developing countries, such as those in West Africa, the quality of healthcare is often poor, and remote communities have very limited access to such services. This favours late diagnosis and ineffective treatment at both early and advanced stages of outbreaks.

Public mistrust of the government also hinders the impact of public campaigns and national education programmes in schools that seek to increase awareness of the risk of zoonotic pathogens. Many of these schemes aim to highlight dangerous behaviours such as eating bushmeat and direct contact with wild animals, and emphasise the importance of early recognition of symptoms.

One Health initiative aims to establish a platform to tackle complex challenges of the modern world which require multidisciplinary approaches and international efforts. In this blog we will continue to promote awareness of these problems, highlighting their intricacy, and illustrating that a holistic and collaborative approach is the only solution for the global community.