Home   #FEMSmicroBlog: Come spring they grill again – even in the Arctic Sea ice

#FEMSmicroBlog: Come spring they grill again – even in the Arctic Sea ice

The World Environment Day 2022 focuses on “Living Sustainably in Harmony with Nature”. While also microbes call Nature their home, global warming impacts their habitats. And few environments are as affected by global warming as the ice in the Arctic Sea. Stefan Thiele explains for the #FEMSmicroBlog how the composition of bacteria and archaea living in ice alters from winter to summer and how changes in the sea ice might affect these communities. #MicrobiologyEvents

Setting the table and preparing the food

Microbes live in all kinds of environments – even in ice swimming in the Arctic Sea. But global warming alters the extent, thickness and structure of sea ice. This also changes the light environment for bacteria, archaea and microalgae living in the lowest layer of the ice.

One such sea ice algae, Nitschia frigida, forms blooms in spring and summer. During this period, the intensity of the light, temperature and nutrient concentrations are high enough for it to perform photosynthesis and grow. Similar blooms are formed by phytoplankton in spring in marine settings.

Depending on the preferred carbon sources, different bacterial and archaeal taxa flourish in distinct sequences. Imagine such a sequence similar to a BBQ, where hosts provide different kinds of burgers – the nutrients. The guests – bacteria and archaea – only come when they can choose the burgers according to their preferred tastes.

A pool party in the ice

Based on their carbon source preferences and burger availability, these guests form a so-called succession. Usually, Gammaproteobacteria and Bacteroidia come first to get the best burgers from the grill. As this taxon feasts, its abundance increases but decreases as soon as the feast is done.

Bacteria and archaea in Arctic Sea ice form successions, in which different taxa thrive according to nutrient availability.

In the meantime, the pea burgers for Roseobacter are ready so that they join the succession. In the later stages, Verrucomicrobia increases in abundance. Towards the end of the succession, the boring patties come out for the last hungry mouths to feed.

Some research has been done on the successions following phytoplankton spring blooms in marine environments. Yet, not much is known about how such BBQ parties are progressing within the Arctic Sea ice. In our study, we investigated the bacterial and archaeal communities in Arctic Sea ice from winter through early summer.

Eating at an icy BBQ

In the winter months, archaea of the Candidatus Nitrosopumilus genus dominate the microbial sea ice community. During spring and early summer, a bloom of the sea ice algae Nitschia frigida provide carbon sources for the bacterial and archaeal community.

This shift in nutrient availability – or the preparation of different kinds of burgers – lead to a shift within the bacterial and archaeal communities. Thus, in spring and early summer, Gammaproteobacteria (dominated by the genera Kangiellaceae and Nitrincolaceae), Bacteroidia (dominated by the genu Polaribacter) and ultimately Verrucomicrobia flourish.

Using a tool to infer metagenomes, our study shows an increased abundance of carbo-active enzymes during spring and early summer. This indicates that during this time period, carbon metabolism plays a more prominent role in the bacterial and archaeal communities than during winter.

Interestingly, during the winter months, marker genes for denitrification are more prominent. This denitrification is most likely done by the Cand. Nitrosopumilus genus which converts ammonia to nitrite and is potentially photoinhibited, thus also explaining their near-complete disappearance in spring.

This indicates, that in winter nitrogen-based metabolisms are more important in sea ice. Once the BBQ season starts in spring, carbon sources determine the growth of different taxa based on their preferences.

Effects of climate change in the Arctic Sea ice impact the growth of sea ice algae as well as bacteria and archaea in the ice.

While not everything is clear so far, we know that climate change-related changes in the Arctic Sea ice can influence the growth of sea ice algae. This changes the carbon source availability for bacterial and archaeal communities with unforeseeable consequences for our environment and global climate. 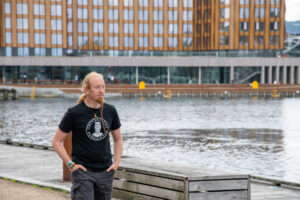 Stefan Thiele is a microbial ecologist and postdoc at the University of Bergen, where he is currently working on different projects regarding arctic microbiomes. These microbiomes include not only sea ice, but also sea water, permafrost, and subpermafrost aquifers. In addition, Stefan enjoys teaching, outreach, BBQs, and engaging in sustainability measures at the University of Bergen. In addition to his education in microbiology, Stefan currently pursues a second master in environmental science, hoping to combine both fields in the future.