Bacteria often exist in biofilms – sticky, slimy, extracellular matrices that are very difficult to eradicate with traditional treatments. Bacteriophages are naturally occurring viral predators of bacteria first considered for therapy in the early 20th century. They are appealing as they can kill multi-drug resistant (MDR) bacteria and have shown promise against bacterial biofilms. The study “Isolation and characterisation of bacteriophages from the human skin microbiome that infect Staphylococcus epidermidis” published in FEMS Microbes reassesses bacteriophage therapies as a way to combat MDR bacteria. David R. Cameron presents for the #FEMSmicroBlog how this approach represents a promise against bacterial biofilms. #FascinatingMicrobes

For many decades, we have relied upon antibiotics to treat bacterial infections and facilitate invasive medical procedures. Bacteria, however, have evolved to overcome the clinician’s arsenal of trusted antibiotics as they exchange antibiotic-resistance genes.

Staphylococcus epidermidis is a thorn in the clinician’s side. With the emergence and global spread of strains resistant to last-line antimicrobials including glycopeptides and rifampicin, S. epidermidis is a recently crowned MDR ‘superbug’.

Perhaps its most infamous superpower is its propensity to produce biofilms on indwelling biomedical materials that are exceptionally difficult to remove with traditional antibiotics. As such, infections due to S. epidermidis are often enduring without drastic intervention (i.e., device removal). Hence, long-term infection with biofilm-producing MDR S. epidermidis seemed like a perfect setting to critically assess and refine phage therapy.

Staphylococcus epidermidis’ most infamous superpower is its ability to produce biofilms on biomedical devices that are difficult to remove with traditional methods.

We were aware of the elegant ways that S. epidermidis has evolved to overcome phage infection. For example, a widespread lab strain contains a CRISPR-Cas system, a type I restriction modification system, plus a eukaryotic-like serine/threonine kinase; that, together protect this bacterium from phage infections.

Likely as a result, very few phages have been isolated so far that are appropriate for therapy. However, we reasoned that phages would be present in the same ecological niche as their phage-susceptible bacterial hosts.

For S. epidermidis, this directed us to the skin of the human face. Equipped with sterile swabs and falcon tubes filled with sodium-magnesium buffer, we searched laboratory corridors, lecture halls, and friend’s backyards for healthy volunteers. We purified S. epidermidis from these volunteers and used the bacteria as the chassis to propagate phages present on the same swab samples.

Using this approach, we isolated unique phages spanning each of the major staphylococcal phage families: Siphoviridae, Podoviridae and Myoviridae. One of the phages showed impressive activity against methicillin-resistant S. epidermidis (MRSE) biofilms.

We then tested the infectivity of the newly isolated phages against a panel of diverse S. epidermidis isolates. Unfortunately, the host-range (i.e., the breadth of strains or species infected by each phage) did not exceed far beyond 50%, which to us was rather narrow.

Where to next for phage therapy of S. epidermidis infection?

To produce phage therapeutic products, one-size-fits-all approaches might be attractive in acute infection settings, in which time for treatment is essential. The phages we identified, however, had narrow host ranges. Hence, being infected with an S. epidermidis isolate that is susceptible to an identified phage equals the odds of a coin toss.

We conclude that the chronic nature of S. epidermidis infections provides an extended window for the tailored production of phage products. In cases where the opportunistic infection is stemming from the patient’s own resident microbiome, the phages could even be purified from the patient’s skin. In this case, the therapeutic may have been under the patient’s nose all along. 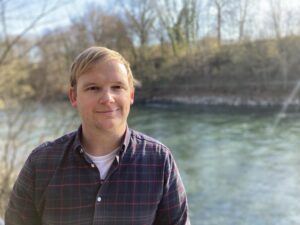 David R. Cameron is a research group leader within the Emerging and Difficult to Treat Infections Research Program of the Department of Biomedical Research (DBMR) and the Department of Intensive Care Medicine at the University of Bern (Switzerland). His team focuses on understanding how bacteria overcome antibiotic therapy and the development of the next line of defence against multidrug-resistant pathogens. For the latter, the team is assessing the potential of bacteriophage therapy.