#FEMSmicroBlog: Microbial cultures and their fermentation activities to preserve food

Fermented food products represent roughly one-third of our food intake. Humans have consumed fermented foods for more than 10.000 years, rendering this way of food processing probably one of the oldest. However, processes to ferment foods also recently sparked interest in preserving food products. François Bourdichon and Lorenzo Morelli explore for the #FEMSmicroBlog how we can use food preservation by microbial fermentation to tackle the global issue of food waste. #FascinatingMicrobes

Fermentation of food products: there is more than what meets the eye!

We use many common terms, for which consensus definitions don’t exist. Fermentation is one of them.

In the 19th century, Louis Pasteur proposed: ”La vie sans l’air” –  life without air –  from a purely chemical perspective. The noun fermentation however comes from the latin verb fervere or the word fermentum, to foam. While fermentation has various definitions from chemistry to food technology perspectives, it is more straightforward to consider its role in the food chain.

During the fermentation process, microbes metabolise and thus significantly modify the food matrix. This desired biochemical change produces a new food product, which is used in various food processing strategies:

Since the early twentieth century, we have learned about the fermentation process and improved its safe use and technological functions. By using dedicated microbiota, we were able to use this food processing technique in industrial applications. This led to a global increase in the consumption of fermented foods.

In the last 100 years, we have learned a lot about the fermentation process and improved its safe use and technological functions.

For centuries, we have tried to preserve and modify food products by using microbial fermentation. And local populations learned to adapt the texture and flavour of indigenous fermented foods according to their liking.

For example, the French enjoy the product of Penicillium roqueforti’s metabolic activity on blue Roquefort cheeses. In comparison, the Japanese appreciate the activity of Bacillus subtilis on soybean in the form of the fermentation product Natto. However, Roquefort consumption in Japan and Natto consumption in France remain both low and it is mostly – if not exclusively – a matter of taste. So, it seems that fermented food products are part of cultural heritage.

Food preservation by fermentation: transformation to extend the shelf life

Fermentation was traditionally an empirical process with 10.000 years of experimenting, which resulted in both successes and failures. Only in the past 100 years, scientific approaches lead to a regulated outcome of the fermentation process.

This enabled us to preserve perishable food matrices and the concept of biopreservation was born. This refers to enhanced food safety and extended shelf life of foods by adding an indigenous microbiota. These inhibit the growth of pathogenic and spoilage organisms by competing with other microbes and producing anti-microbial metabolites.

We all know how raw milk gets spoiled very fast, particularly when the cold chain is not an option. In comparison, fermented dairy products can be kept for longer, up to several years for certain hard type cheeses.

As a natural way to protect against spoilage and harmful food contamination, biopreservation keeps food products fresh and safe throughout shelf life. Thus, thanks to microbes, food preservation by fermentation even helps us reduce food waste.

Biopreservation is a natural way to protect foods against spoilage and thus keeps it fresh and safe and reduces food waste. 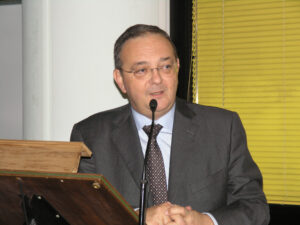 François Bourdichon is a food safety microbiologist with 20y+ in the food industry, dairy and confectionery. He has been a delegate of France at the International Dairy Federation since 2010. He holds a master degree in general microbiology, Pasteur Institute, France, and is presently finalizing his second PhD (the first was not completed) under the supervision of Professor Lorenzo Morelli.