Home   #FEMSmicroBlog: About how pesticides affect the microbes in bee guts

#FEMSmicroBlog: About how pesticides affect the microbes in bee guts

Social bees — such as honey bees, bumble bees and stingless bees — are important pollinators for natural and agricultural plant communities. Unfortunately, some social bee species are currently in decline and pesticides are hypothesized to be contributing factors. The review “Pesticide-Induced Disturbances of Bee Gut Microbiota” published in FEMS Microbiology Reviews outlines the effects that pesticides have on microbial communities in bee guts. Michelle Hotchkiss explains for the #FEMSmicroBlog how pesticides disturb these communities and what this may mean for bee hosts. #FascinatingMicrobes

Bees and their microbes

When bees eat pollen and nectar, they often also take up environmental contaminants like pesticide residues. These residues can have negative impacts not only on the bees themselves but also on their gut microbiotas.

In the gut of social bees live five bacterial taxa that are highly adapted to their bee hosts and provide a range of host benefits (no, not honey making!). For example, bee gut microbes can stimulate the host immune system and protect it from pathogens and parasites. Therefore, pesticide-induced disturbances of such communities may have negative impacts on bee health and their performances.

Pesticide-induced disturbances of the bee gut microbiota may have negative impacts on bee health and performance.

The review “Pesticide-Induced Disturbances of Bee Gut Microbiotas” published in FEMS Microbiology Reviews explores the effects that pesticides can have on the microbes living in bee guts. The article discusses host and pesticide choice, how and what types of data were collected, which bacterial taxa are most affected by pesticides and what a disturbed gut microbiota means for bee host performance.

The review summarizes how the abundance of each core gut microbe changes after bee hosts were exposed to pesticides. The three key parameters are: 1) how many pesticides can cause a change in abundance for that microbe, 2) the average direction of the change (i.e., increase or decrease) and 3) the extent of change.

Importantly, these changes in abundance can also vary based on pesticide dose, exposure duration and season. Additionally, pesticides can disturb gut microbes either by directly affecting the growth of microbes or by causing a decline in host health such that the host can no longer regulate its gut microbiota properly. Each of these two methods further determines the speed and consistency of its disturbances.

What does a pesticide-disturbed gut microbiota mean to a bee?

It is still not clear how pesticide-disturbed gut microbiota may impact bee performance.

Therefore, it is clear that multiple pesticides disturb the gut microbial communities of social bees. At the same time, we are just beginning to scratch the surface of what that means for bee host health and performance. 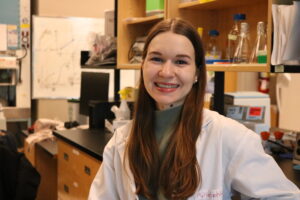 Michelle Hotchkiss is a PhD candidate at the University of Ottawa under the supervision of Drs. Jessica Forrest and Alexandre Poulain. She is interested in the symbiotic relationships between insects and their resident microbiotas. Currently, she is researching how fungicides and herbicides disturb the gut microbiotas of bumble bees, both during the colony growth stage and directly after hibernation. Besides research, Michelle is dedicated to using scientific outreach to educate the public about insect diversity and the importance of beneficial microbes to animal health.