Home   #FEMSmicroBlog: “Successful collaborations enable us to delve into new realms of research”

#FEMSmicroBlog: "Successful collaborations enable us to delve into new realms of research"

For this new entry in the #FEMSmicroBlog we spoke with microbial ecologist Ronald Oremland, author of ‘Got Selenium?’ for FEMS Microbiology Ecology, to talk about career choices, serendipity and perseverance in science, the fun of doing research, and the value of collaborators. #MicrobiologyIsFun

In your retrospective article you present your work on microbial metabolism regarding Group 15 and 16 elements in the periodic table. If you would start your career today, would you focus on the same or on different elements, and why?

Let’s go back > 35 years ago and say that if John Conomos (my supervisor at the time) did not suggest to work on selenium, I never had an incentive to work on it. I would have continued to work on the methane cycle, but emphasizing Mono and Big Soda Lakes.

This would have encompassed isolations of novel haloalkaliphilic methanogens and methanotrophs, delineating which substrates were preferred in these locations. There are many other chemical elements out there to test, like redox reactions of iodine and other halogens that one could have made some inroads on. But most likely, I would have stuck with methane, since after all that’s what I knew best and where all my friends at the time were active.

From your writings emerges not only a passion for microbiology, but also an adventurous spirit in the field and in the lab, and a general fun in doing research. Is there a piece of experience you can pass over to early career scientists who need to endure a particular difficult situation, like a grant rejection or an important experiment who would not work?

Difficulties are overcome through character building perseverance and introspective insights. Young scientists are particularly frail when it comes to setbacks.

I can recall an instructive incident of my own as a cocky know-it-all postdoc, when I was trying to run proteins using a simple tried and true Lowry method. For the life of me I could not get a reasonable standard curve with BSA protein. It turned out that the test tubes in the lab were rather short, and so to prevent spillage upon vortexing I capped them with rubber stoppers. The standards came in contact with the stoppers, and the stoppers all give off a variety of reactive volatiles that screw up the color change of the assay. A simple switch to taller test tubes purloined from another lab made everything workable, but I had wasted some 6 weeks, and was beset with self-doubts.

Nonetheless, I was able to step back, think, and figure out what it was that I was doing wrong, sometimes with the helpful advice of a colleague. But now and then one really needs to take a break and have a little fun to lighten the mood.

You said before that collaborators are crucial for a career in microbiology. Are colleagues serendipitous companions that share the same passion? What is the best way to approach a colleague who shares same interests but might also be competing on a similar project?

I can only respond by saying close collaborations have worked out very well for me. It might not be a panacea for everyone, and there are colleagues with whom I have avoided collaboration with because the interpersonal chemistry did not feel right. Successful collaborations have enabled me to delve into realms of research in which I lacked technical competence, but nonetheless understood the importance and need for such a path to add complexity and detail.

The hardest part of successful collaborations is to subsume your ego and the inherent psychological need to be the center of attention. This is a leadership skill one acquires with time, and it is not easy to develop. Your collaborators deserve their shot as well to be in the limelight (i.e., the lead author of a key paper). This is particularly difficult with competitors and may be facilitated by mentally figuring out beforehand who would be the lead author, a facet that could be aided by trying to come up with two papers rather than just one. That would give each of you a crack at such name recognition.

Successful collaborations breed trust and friendships amongst those involved, and over time it gets easier to do, and is a very pleasant, long-lived experience.

Isaac Asimov is quoted with “The most exciting phrase to hear in science, the one that heralds new discoveries, is not ‘Eureka!’ but ‘That’s funny …’” What is an unexpected outcome of an experiment you remember? Was it worth of a new discovery?

I can recall an instance where both terms were applicable. I was carrying out a series of experiments with anoxic sediment slurries which I amended with selenate [Se(VI)] and a variety of electron donors to speed up the dissimilatory reduction of Se(VI) to Se(0). So I was already at the “eureka!” phase in as much as we had a lot of good evidence that Se(VI) was a novel, bona-fide e-acceptor for certain anaerobes.

I was doing follow-up experiments testing out a variety of e-donors that would work. I had uncapped one of the tubes with slurries of Se-oxyanions and was about to decant it when instead I turned my head to answer a phone call to my lab. While on the phone I noted that the hand holding the centrifuge tube was growing hot, and when I turned back to look, the tube had turned from dull grey to bright orange, indicating the formation of copious Se(0).

Yet this didn’t conform to the “eureka” paradigm we were trying to prove. We were eventually able to show that if given an excess of electron donor over the Se(VI) acceptor, the selenotrophs would carry out a further dissimilatory reduction of accumulated Se(0) to Se(-II). The Se(-II) would autoxidize to Se(0) when exposed to air, resulting in an exothermic reaction. But it took another 14 years after my hand turned hot to get a clear answer to the phenomenon (Herbel et al. 2003).

The article  ‘Got Selenium?’ for FEMS Microbiology Ecology is part of the Thematic Issue ‘Microbes vs. Metals: Harvest and Recycle’ (submissions are open until July 31 2020). You can read here the full interview with Prof. Ronald Oremland for the #FEMSmicroBlog.

About the interviewee of this blog 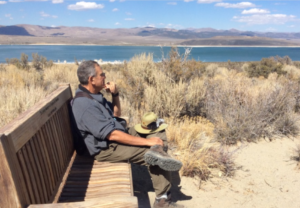 grew up by the ocean in Brooklyn, New York, near Coney Island. He graduated with a degree in biology from Rensselaer Polytechnic Institute. and attended University of Miami for graduate school in oceanography, but this was interrupted by military service in the U.S. Navy and served as a ship’s diving and salvage officer. After release from active duty, he returned to the University of Miami and was awarded his PhD in 1976, and then ventured west to California for a postdoc at NASA Ames Research Center. In 1977 he joined the U.S. Geological Survey, working there for 42 years until his retirement in 2019. He is now an emeritus senior scientist.