Lwoff is one of my scientific heroes. In is famous article “the concept of virus” published in 1957 in Journal of General Microbiology and based on his work with bacteriophage, he was already able to propose a rigorous, clearly stated, set of criteria to distinguish any type of virus (i.e. “virus in general”), from any cellular type of microorganism. Amazingly, when considering how little was then known of the mechanisms of gene transcription and protein translation, 3 of the 4 main criteria he selected:

In particular, Lwoff was smart enough not to retain small size as a criterion, albeit the most obvious (and historical) property of viruses at his time.
Amazingly, when we discovered the first giant viruses (Mimivirus) and especially the largest and most complex of all, the Pandoraviruses, we had to go back to Lwoff’s historical criteria (actualized in his 1966 Annual Rev. Microbiol. article with Tournier), to convince ourselves (and the referees) that we were actually dealing with viruses!

On the top of it, Lwoff’s writing style was amazingly entertaining, compared to the lame style that we are forced to comply with nowadays. Which editor today will accept sentences like this:

the virus has been unveiled. Now, it stands before you, naked. Do not turn your eyes away, it is only a concept. And the concept of virus, just as any other concept, the concept of a lecture, the concept of woman, is not as difficult to handle as the real object”

….viruses should be considered as viruses because viruses are viruses”. Stating by this that there is no intermediate between the viral and the cellular world.
However defective are the smallest parasitic bacteria we know today, however complex and large are the giant viruses we keep discovering, the conceptual wall build by Lwoff, 60 years ago, is still solidly standing between viruses and cells.” 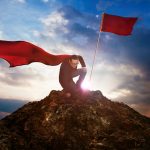 Who is your microbiology hero? Tell us!