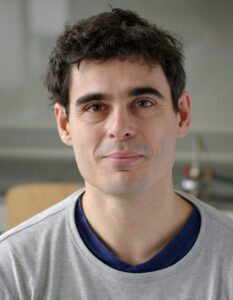 Dr Csaba Pál has contributed to several related fields, including genome evolution, systems biology and microbial experimental evolution. He has demonstrated that antagonistic co-evolution with parasites has a large impact on the evolution of bacterial mutation rate (Pal et al. Nature 2007). This paper showed for the first time how biotic interactions can shape mutation rate evolution.

The Pál lab studies the problem of antibiotic resistance. By combining laboratory evolution, genome sequencing, and functional analyses, they charted the map of evolutionary trade-offs between antibiotics. They found that mutations that cause multi-drug resistance in bacteria simultaneously enhance sensitivity to many other unrelated drugs (collateral sensitivity), and they also explored the underlying molecular mechanisms. The concept of collateral sensitivity is now emerging as one of the leading concepts in antibiotic resistance research.

Finally, Csaba is an advocate of the emerging field of evolutionary genome engineering. These technologies enable the modification of specific genomic locations in a directed and combinatorial manner, and allow studying central evolutionary issues in which natural genetic variation is limited or biased. However, current tools have been optimized for a few laboratory model strains, leading to the accumulation of numerous undesired, off-target modifications and demand extensive modification of the host genome prior to large-scale editing. The Pál lab presented a simple, all-in-one solution (Nyerges et al. PNAS 2016). The method is unique as it allows systematic comparison of mutational effects and epistasis across a wide range of bacterial species.