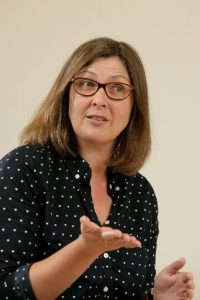 Head of the Division of Molecular Microbiology, School of Life Sciences, University of Dundee