This post is guest written by our dedicated volunteers, Teja Sirec and Tomasz Benedyk.

Antimicrobial resistance (AMR) describes the rising resistance of  common human pathogenic and commensal microorganisms (i.e. bacteria, viruses and parasites) to widely used drugs. Antimicrobials are chemical agents that are able to selectively kill or inhibit the growth of microbes, with antibiotics being selective against bacteria. The vast majority of antibiotics used by humans come from naturally occurring compounds and are often produced by bacteria themselves.

Bacteria have evolved mechanisms to overcome the effects of antimicrobials in their environment, which is best described by the fast Darwinian evolution model: spontaneous mutations in one individual give it a survival advantage over the rest of the population, which are then passed on to the next generations. 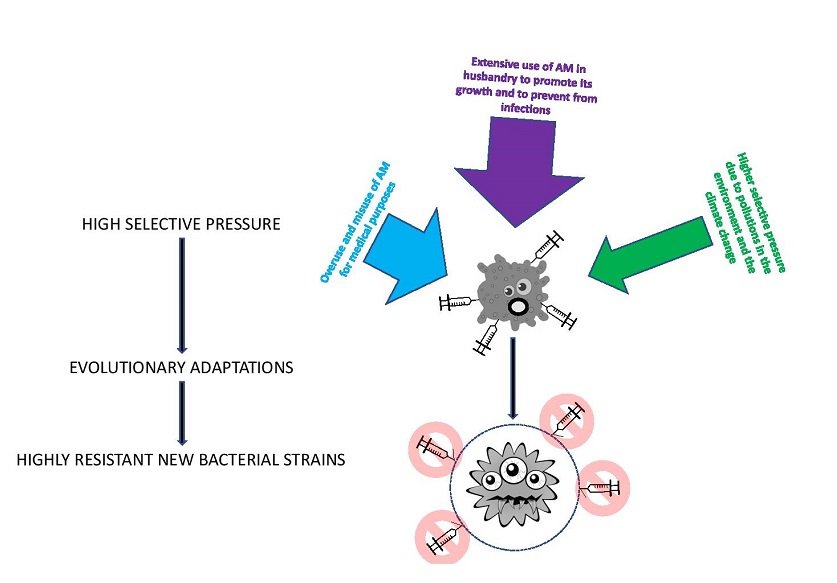 Such adaptations can be transmitted to other bacteria by horizontal gene transfer, which allows whole bacterial colonies to quickly develop and spread resistance over a short period of time. However, the growing rise of bacterial resistance to drug treatment is a serious threat to global health security and risks modern medicine as we know it.

Global factors such as climate change, air pollution, and water and soil contamination from heavy metals also puts a high selective pressure on bacteria to adapt and become resistant to these environmental stressors.

The One Health Initiative is an important framework for addressing several issues threatening health, such as AMR. The essence of the One Health approach in tackling AMR appropriately and effectively  is that collaborative efforts and partnerships are necessary across the human health, veterinary medicine and environment sectors.

The following pathogens are concerns for AMR. We highlight a FEMS journal article for each pathogen to show how the One Health approach is being implemented in research to tackle the issue of AMR:

If you are interested in learning more about antimicrobial resistance and global health, get involved in our Fighting AMR and One Health campaigns.