Home   Perspectives: Drowning in a Sea of Silence

Perspectives: Drowning in a Sea of Silence

In February 2021, Aisha White, a digital marketer and freelance writer, shared a personal blog detailing the circumstances around her sexual assault at the hands of a prominent conservation scientist. Her confession started a wave of #MeToo stories that has crashed down on the scientific Twitter-sphere, with many shocked and unbelieving by how common sexual harassment and assault are within our community.

The scientific community prides itself on facts and figures, empirical evidence, and peer-review. But we forget that scientists are humans too. Our education and training do not put us above any other industry when it comes to abusing power.

About the Women in Ocean Science community

Stories from Aisha and other survivors remind us how important it is to shed light on the insidious problems within our own professional communities. Until systems change and start dealing with insidious problems such as sexual harassment, we do not have an inclusive environment.

At Women in Ocean Science, we wanted to be part of that change. We are an international community of almost 30,000 women and female-identifying scientists. And we are all taking on the challenging and noble cause of understanding and protecting our oceans.

But, unfortunately, we also have something else in common: We all have stories to share of someone ogling us as we changed into dive gear, a drunken professor getting a little “handsy” at a conference, and the uncomfortable jokes made in a meeting.

Sexual harassment is seriously under-reported. The England and Wales Rape Crisis centre reported that only 15% of those who experience sexual violence report to the police. This is even lower in university settings where only 6% of students reported their experience of sexual violence to the university. Due to the lack of reporting, many choose to believe that sexual harassment and misconduct are not prominent issues on university campuses.

We decided to raise awareness of just how prevalent sexual harassment in STEM really was. So, we created a survey and sent it to our community in 2020 to shed light on this ongoing problem.

The survey was targeted at women across all levels in science; undergraduate students (17% of participants), postgraduate students (33%), volunteers/interns (5%), professionals (41%), and others (4%, including technicians).

The full report is published on the Women in Ocean Science website on International Women’s Day, March 8th. The results, although not surprising, are truly shocking.

We found that most of these encounters happened on a university campus (45%) or during fieldwork excursions (46%), but also in the laboratory (18%) and at conferences (17%).

Perhaps the most shocking and worrying statistic that comes from our survey is that people do not feel comfortable reporting the harassment they have experienced or witnessed. When asked for reasons for the hesitancy, our respondents assumed that they would not be believed (24%), they would be blamed (41%), they would suffer retaliation from the harasser (35%) or it might harm their future career (52%). Therefore, these kinds of incidents are not spoken about.

Now, that we have started to understand how bad the situation is in many scientific fields, we can draw more attention to it to evoke change. But first, we have to overcome the hesitancy of people and victims to speak out.

We cannot hope to build an inclusive environment within STEM when our community fears retaliation and/or additional trauma as a result of sexual harassment.

It should not be that a survivor is labeled “brave” for coming forward.

They should not have to come forward in an environment and society that will immediately act to discredit them and protect their perpetrator.

We hope our report and the conversations started by Aisha White and fellow survivors help direct a dialogue that will turn into change within research institutes, universities, and societies to diminish the potential for this abuse of power.

Where there is smoke, there is an inferno – Rose McGowan 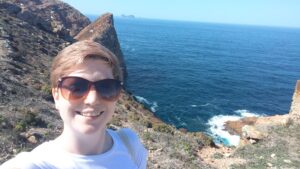 Ally Hughes is a final year PhD student in Marine Biotechnology at the University of Strathclyde, Scotland. She has been an editor with Women in Ocean Science since October 2019 and is passionate about making science an accessible and inclusive environment for everyone.