Many unicellular organisms, including some bacteria and yeasts, possess the ability to form multicellular structures when experiencing certain environmental conditions. In yeasts, multicellular lifestyles have been well-studied in the model organism Saccharomyces cerevisiae, but not much is known about such structures in the industrial yeast Komagataella phaffii. The authors of the study  “Pseudohyphal differentiation in Komagataella phaffii: investigating the FLO gene family” in FEMS Yeast Research identified conditions that trigger the formation of multicellular (pseudohyphal) structures in K. phaffii and uncovered flocculin proteins involved in their formation. #FascinatingMicrobes

We have all heard about the very famous Aesop’s fable ‘The Oak and the Reed’ (or some version of it) where, when facing a storm, the strong unyielding oak breaks but the more flexible reed bends with the wind and survives. The story teaches the importance of adaptability for survival in the face of adverse conditions. Fascinatingly, adaptability for survival is observed even in the most basic life forms.

Unicellular organisms differentiating to form multicellular structures is one such example. When we think about yeasts, we generally picture single-celled microbes. Interestingly, many yeasts can also switch to multicellular forms upon facing adverse environmental conditions because these forms can offer certain advantages, thus increasing the chance of survival.

In most yeasts, the formation of multicellular structures is regulated by a family of genes encoding cell-surface proteins, like the flocculin or FLO gene family in S. cerevisiae. Extensive studies have been carried out to understand the functions of these genes, which also have practical applications. For example, the flocculation behaviour of S. cerevisiae is utilized for designing economic cell separation techniques in the brewing industry.

Pseudohyphal growth in K. phaffii was first reported in another study where researchers ran continuous chemostat cultivation in bioreactors at a wide range of growth rates (µ) controlled by limiting the amount of glucose. At a point when the growth rates were lower than 0.1 h-1, they observed some cells switching to a more elongated shape, ultimately resembling pseudohyphal structures.

The author of a new study in FEMS Yeast Research, “Pseudohyphal differentiation in Komagataella phaffii: investigating the FLO gene family”, investigated this observation further and uncovered the regulation mechanism behind the transition to this form.

The first observations of pseudohyphal cells of K. phaffii in the chemostat was quite surprising. In fact, we initially suspected these cells to be some contamination. After repeatedly observing this phenotype in similar chemostats we realized that such slow growth rates during glucose limitation are triggering K. phaffii to switch to a pseudohyphal form.”

— The authors of the study in FEMS Yeast Research

The study shows that the transition to a pseudohyphal lifestyle in K. phaffii is much more tightly regulated than in S. cerevisiae. Only extended periods of cultivation at slow growth-rates in glucose-limited conditions are able to trigger the phenotype. The phenotype also seems to be heritable and persist even after switching to a faster growth rate.

The authors used a combination of molecular and systems biology techniques to uncover the regulation mechanism behind the formation of these pseudohyphal structures. They concluded that unlike in S. cerevisiae, there is not one sole flocculin gene responsible for the pseudohyphal phenotype. Instead, the initiation and maintenance of these structures seems to be caused by the interplay of three different flocculin genes (FLO11, FLO5-1 and FLO400), all of which are controlled by one master transcription factor, Flo8.

This is the first extensive study on K. phaffii flocculins. Also, the study presents a novel form of regulation of a multicellular phenotype so far not observed in any other yeast.

The flocculin genes are as mysterious as they are interesting. This study is the first step in understanding the regulation of multicellular differentiation in K. phaffii and will pave the way to understanding and possibly controlling the formation of such multicellular structures. This is important, especially during industrial bioprocesses.’’ 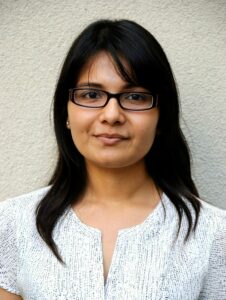 Sonakshi De is a postdoctoral researcher at the Institute of Microbiology and Microbial Biotechnology at University of Natural Resources and Life Sciences in Vienna (Austria). Her interest in yeast biotechnology developed during her PhD which was focussed on understanding the impact of epigenetic regulation on heterologous protein production in the industrial yeast K. phaffii. Currently, she is continuing her research in the area focussing on recombinant protein production and strain improvement.