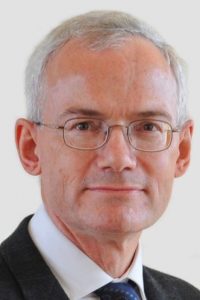 member of EAM, Leopoldina – National Academy of Sciences and The Royal Society

Geoffrey L. Smith is Professor of Pathology and a Wellcome Trust Principal Research Fellow at the University of Cambridge. He obtained his PhD (1981) for work with influenza virus at NIMR, London. Then as a postdoc in the laboratory of Bernard Moss at NIH, USA (1981-84), together with Michael Mackett, he developed vaccinia virus as an expression vector and established the use of genetically engineered viruses as live vaccines. He continued working with poxviruses after returning to UK at Cambridge (1985-9), Oxford (1989-2000), Imperial College London (2000-11) and now as Head of the Department of Pathology in Cambridge. His research studies the interactions of poxviruses with the host cell and immune system.

Currently, he is Chairman of the WHO Advisory Committee for Variola Virus Research, Chairman of the SAB of the Friedrich-Loeffler Institute (German Ministry for Food and Agriculture) and a member of the Research Grants Council, Hong Kong. Formerly, he was President of IUMS, Chairman of the Royal Society Committee for Scientific Aspects of International Security, a member of the Royal Society Science Policy Advisory Group, and a Governor of the Lister Institute of Preventive Medicine. He was elected a Fellow of the Academy of Medical Sciences (2002), the Institute of Biology (2002), the Royal Society (2003), a Founding Member of the European Academy of Microbiology (2008) and a member of Leopoldina – the German National Academy of Sciences (2011). In 2005 he was awarded the Feldberg Foundation Prize in Medical and Biological Science, in 2012 the GlaxoSmithKline / American Society for Microbiology International Member of the Year Award and in 2016 the Loeffler-Lecture, a honorary lecture jointly organised by the Friedrich-Loeffler-Institut and the Alfried Krupp Wissenschaftskolleg, Greifswald, Germany.