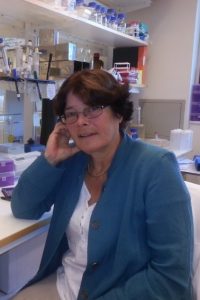 Victoria Shingler graduated with a BSc in Biological Sciences from Leicester University, UK in 1980 and obtained her PhD in Molecular Genetics in the laboratory of Christopher M. Thomas at the University of Birmingham, UK in 1984. She performed her post-doctoral research within the laboratory of Michael Bagdasarian (1985-1987), at what is now the Department of Molecular Biology, Umeå University, Sweden. She has remained in Sweden at the same institution ever since, first as a group leader (1987-1989) and then as a lecturer (docent, 1990-1995). In 1995 she was awarded a ‘Särskild forskartjänst’ – a special six year researcher position sponsored by the Swedish Natural Science Foundation (NFR). During the time frame of this NFR position (1995-2002), she was appointed to her current position as a Professor in Microbial Physiology in 1996.