At the end of 2019, the European Academy of Microbiology (EAM) elected eleven new members from across different European countries and disciplines, who are given the opportunity to present themselves and their research at the upcoming EAM Members meeting (March 27-28 2020 in La Granja, Spain).

This month, we spoke with Prof. Sigal Ben-Yehuda at the Hebrew University of Jerusalem (Israel) about her research, and the profession of a microbiologist.

We study three main subjects in our laboratory:

a) Bacterial nanotubes. Our laboratory discovered and characterized intercellular membranous nanotubes formed among neighbouring bacterial cells. We provided evidence that via these junctions bacteria exchange cytoplasmic molecules including, antibiotic resistant proteins and DNA. Our laboratory is now engaged in defining the molecular components and the molecular cargo of nanotubes. We also peruse our recent exciting discovery of the employment of nanotubes by pathogenic bacteria to extract nutrients from mammalian host cells.

c) Spore dormancy and awakening. Dormant bacterial spores can survive long periods of time and withstand extreme environmental conditions, but possess the remarkable ability to rapidly convert into actively growing cells. Our laboratory studies spore dormancy is maintained and how it is ceased, and what are the first molecular events occurring during revival.

The most unusual finding was the observation that cytoplasmic GFP molecules could be exchanged among neighboring cells of the soil bacterium Bacillus subtilis. We noted that wild-type cells, neighboring GFP-producing cells, gradually acquired a weak fluorescent signal, suggesting that cytoplasmic GFP molecules were being distributed among adjacent cells. These results raised the possibility of the existence of intercellular connections that facilitate this molecular flow, and ultimately led to the discovery of bacterial nanotubes.

I enjoy the exploration of something so fundamental, but still new to us. Personally, I enjoy very much to visualize bacteria by time lapse microscopy, I found it fascinating to see how they grow and interact. 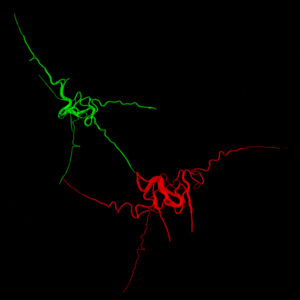 I find it hard to envision the future with the remarkable progression of science. Though, I think that understanding the rules of multi-species bacterial communities, and the ability to predict inter-species interactions, will take us to a new era of intelligent design of bacterial communities for our own benefit.

It is a very long path, sometimes very frustrating, but there is nothing like the joy of adding a major piece to a puzzling scientific question.

I completed my PhD degree at Tel-Aviv University, investigating cell division in budding yeast. I continued my scientific career as a postdoctoral trainee at Harvard University, at the laboratory of Prof. Richard Losick. At Harvard, I studied the developmental process of sporulation in bacteria, and my major achievement was to provide new mechanistic insights into the most critical events occurring upon entry into sporulation (e. g. Ben-Yehuda and Losick, Cell 2002; Ben-Yehuda et al., Science 2003).

Prof. Ben-Yehuda in her office

Throughout the years I received several awards including the EMBO Young Investigator Award, The Hebrew University President’s Award, The Sir Zelman Cowen Prize, the Shilo Award from the Israel society for microbiology. I also received the European Research Council (ERC) Starting Grant in 2008, an ERC-Advance Grant in 2013, and an ERC-Synergy grant in 2018 with Prof. Ilan Rosenshine.