Prof. Uri Gophna is a member of the European Academy of Microbiology (EAM). The EAM is a leadership group of around 150 eminent microbiology experts who came together in 2009 to amplify the impact of microbiology and microbiologists in Europe. Uri is based at Tel Aviv University in Israel and is a specialist in evolutionary biology. 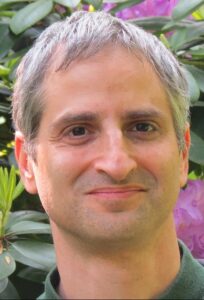 “CRISPR-Cas systems are microbial defence systems that provide prokaryotes with acquired and heritable DNA-based immunity against selfish genetic elements, primarily viruses. However, the full scope of benefits that these systems can provide, as well as their costs remain unknown. Specifically, it is unclear whether the benefits against viral infection outweigh the continual costs incurred even in the absence of parasitic elements, and whether CRISPR-Cas systems affect microbial genome diversity in nature.

Since CRISPR-Cas systems can impede lateral gene transfer, it is often assumed that they reduce genetic diversity. Conversely, our recent results suggest the exact opposite: namely that these systems generate a high level of genomic diversity within populations. We have recently combined genomics of environmental strains and experimental genetics to show that archaea frequently acquire CRISPR immune memory, known as spacers, from chromosomes of related species in the environment. The presence of these spacers reduces gene exchange between lineages, indicating that CRISPR-Cas contributes to diversification.

We have also shown that such inter-species mating events induce the acquisition of spacers against a strain’s own replicons, supporting a role for CRISPR-Cas systems in generating deletions in natural plasmids and unessential genomic loci, again increasing genome diversity within populations.”

How do you see this work impacting the field of microbiology?“Our work will demonstrate that CRISPR-Cas is not just another defense system, but that due to its acquired immunity aspects it can generate large changes in genome composition and be a substantial force driving population genome diversity of prokaryotes. Our hope is that our research will reveal new evolutionary roles for CRISPR-Cas systems and that many of the mechanisms that we unravel will be relevant to bacteria as well as archaea.”

“We have two research associates with a PhD in the lab with much research experience as well as MSc and PhD students, and also undergrads that perform short-term research projects in the lab. In the summer we often have visiting research interns from the USA, some of whom contributed much to some our recent successes.

ally responsible, yet many resources are shared including strains, and projects may have points of overlap, so the more people are interested in the work that others do, the better. I try to be present in the lab as much as possible and to interact in person with all my graduate students and research associates several times a week. When I am away from the lab I keep in touch via email daily.

We have had different kinds of activities of lab events such as a lab picnic, lab hike or lab movie night, about 1-2 times a year.”

Could you describe your scientific inspirations?

“I like to start from observations made on the basis of environmental genomic data, form hypotheses and then test them in the lab. It is immensely satisfying to go beyond comparative genomics to experiment all stable predictions. I also like that in the many cases that the microorganisms “prove me wrong”, there are often exciting discoveries to be made.

I find that inspiration generally comes at unexpected times when thoughts are free to flow. Maybe that is why Darwin had a daily routine of taking long walks outside that stimulated associative thinking. Another source of inspiration for me is to attend seminars that are far from my research disciplines, which not only expose me to new methodologies and technologies I may have been unaware of, but also tend to refresh my perspective.”

Share this page
We use cookies on our website to give you the most relevant experience by remembering your preferences and repeat visits. By clicking “Accept All”, you consent to the use of ALL the cookies. However, you may visit "Cookie Settings" to provide a controlled consent.
Cookie SettingsAccept All
Manage consent