Home   #FEMSmicroBlog: An alternative enzyme for methanol metabolism in yeast

#FEMSmicroBlog: An alternative enzyme for methanol metabolism in yeast

Even though methanol is widely abundant in nature, microbes struggle with metabolizing it due to the production of highly toxic intermediates. Yeast evolution has taken an apparently wasteful route for the initial step to oxidize methanol to formaldehyde, dissipating heat rather than harvesting the energy released by this oxidation. In “Beyond alcohol oxidase: The methylotrophic yeast Komagataella phaffii utilizes methanol also with its native alcohol dehydrogenase Adh2” published in FEMS Yeast Research, Zavec and colleagues have identified an underlying secondary route via an energy-conserving enzyme. Senior author Diethard Mattanovich presents for #FEMSmicroBlog how this work could pave the way towards developing more efficient yeast platforms for single-carbon biotechnology. #FascinatingMicrobes

Methanol is the simplest of all alcohols and abundantly available in nature. Plants release an estimated 100 Mio tons of methanol annually, and other natural sources combined, add another 50 Mio tons.

Even though methanol is rich in energy, microbes are limited in using methanol for several reasons: the first intermediate of the methanol pathway, formaldehyde, is highly toxic. Also, methanol is a single carbon molecule, so that cells need to form all carbon-carbon bonds by rather complex metabolic cycles to make up their biomass.

A bit overlooked is also the first step of methanol metabolism since it is not favored by thermodynamics. One-third of the chemical energy of methanol is released by an oxidative reaction, and its harvest in form of reducing equivalents would be crucial for high yield growth on methanol. However, coupling this reaction to NADH production can only occur efficiently at higher temperatures.

Despite methanol metabolism leading to toxic intermediates in the cell, bacteria and yeasts evolved pathways to grow on methanol.

Despite these limitations, several bacteria and yeast species have evolved different pathways to grow on methanol. Interestingly, mesophilic yeasts have circumvented this limitation by evolving a methanol oxidase that transfers the released electrons to oxygen. This step works efficiently at ambient temperatures but wastes energy. Thus, the biomass yield of methanol is only about half of what methylotrophic bacteria can achieve.

We aimed to better understand methanol oxidation in yeast and identify potentially useful bacterial enzymes that harvest the energy of this reaction. Hence, we studied methanol oxidase knockout strains of Komagataella phaffii, which is a methylotrophic yeast also known as Pichia pastoris and widely used in biotechnology.

To our surprise, we found a native hidden NADH-producing reaction in these strains that had a higher turnover rate than other overexpressed bacterial enzymes. We were able to trace the reaction back to an old acquaintance: alcohol dehydrogenase Adh2. The Saccharomyces cerevisiae Adh produces 100 billion liters of bioethanol per year, as well as beer and wine, and makes bread dough rise.

In its reverse reaction in K. phaffii, Adh2 oxidizes methanol to formaldehyde and harvests electrons to NADH, thus providing extra energy for the cells. Due to the unfavorably low growth temperatures of K. phaffii, the reaction rate is low but significant. Overexpressing the enzyme can further enhance the turnover of methanol and produce more cellular energy. This would enable more efficient methanol-based bioprocesses in the future.

We conclude that despite the availability of native alcohol dehydrogenase in yeasts, evolution has sacrificed its energy efficiency for faster growth rates by evolving a methanol oxidase. This serves the natural growth of yeast cells on methanol at ambient temperatures. However, it also reduces carbon yield on methanol in biotechnology applications. Now that we know its role, we may overcome this by laboratory evolution of Adh2. 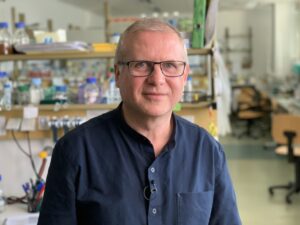 Diethard Mattanovich is Professor of Microbial Strain Design at the University of Natural Resources and Life Sciences Vienna (BOKU) and Director of the Research Area “Microbial Parts and Systems” at the Austrian Centre of Industrial Biotechnology (acib). His research focuses on the biotechnology of microorganisms, with a focus on metabolic and cell engineering of yeasts for the production of metabolites and recombinant proteins. He is Vice President of the European Federation of Biotechnology (EFB), and a Member of the International Yeast Commission (ICY).