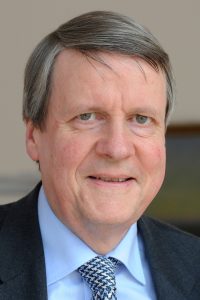 Prof Jörg Hacker completed his PhD in 1979 and became Professor of Microbiology at the University of Würzburg, Germany in 1988. In 1993, he was appointed Director of Würzburg’s Institute for Molecular Infection Biology. His main research interests include  pathogenicity factors of pathogenic enterobacteria, regulation of microbial virulence genes and pathogenicity of human pathogenic fungi.

Jörg has also done extensive work outside of Germany including two six-month research projects at the Institut Pasteur in Paris in 2000 and 2005. In 2006, he also accepted a position as guest professor at Tel Aviv University, Israel as a Fellow of the Sackler Institute for Advanced Studies. Before being elected academy president in 2010, Jörg was the Director of the Robert Koch Institute in Berlin.

From 2003 to 2009, he was the Vice President of the German Research Foundation (DFG). In 2013, he was appointed to the UN Secretary General’s Scientific Advisory Board, which confers with the General Secretary of the United Nations on scientific matters.