Home   #FEMSmicroBlog: 17 September is International Microorganism Day. But why 17 September?

It is a month until International Microorganism Day 2020. There’s an interesting tale behind the date, 17 September. Discover in this new entry for the #FEMSmicroBlog what 17 September has to do with ”small animals” in the canal water of Delft (The Netherlands), bacteria on teeth, correspondence to the Royal Society of London, microbial art, and more! #MicrobiologyIsEverywhere

*This blog entry has been translated into several languages*

Microbiology, microscopy, zoology, and the study of anything smaller than can be seen with the eye, all recognise Dutch merchant Antonie van Leeuwenhoek (1632-1723) as a pioneering, founding father. He had no scientific training and little education, but his curiosity was insatiable. He used home-made lenses and microscopes of his own design to examine all sorts of everyday things in detail, including bees, peppercorns, body lice, and fungi. When in 1677, he observed canal water through his microscope, he was amazed to see what he called tiny animals or animalcules (literally “small animals”, now defined as protists), the first microorganisms ever observed.

Although not the first to use a microscope, his lenses were superior to anything used before and were capable of magnifying objects by a factor of around 300 enabling him to observe details as small as 1.35 μm. (5-6 times stronger than the microscope used by his contemporary, Robert Hooke).

In 1683, the latest subject to undergo van Leeuwenhoek’s microscopic observation, was plaque from his own teeth. Here, he made his next huge discovery, describing different movements of these  animalcules in the plaque between his teeth, becoming the first person to observe bacteria. A diligent investigator, he made detailed descriptions, measurements and illustrations of his observations. Many of which survive and are amazingly detailed.

[…] my work was not pursued in order to gain the praise I now enjoy, but chiefly from a craving after knowledge, which I notice resides in me more than in most other men. And whenever I found out anything remarkable, I have thought it my duty to put down my discovery on paper, so that all ingenious people might be informed thereof.”

Van Leeuwenhoek sent a letter full of observations, outlining what he had been the first person ever to see, to the Royal Society in London. Driven by curiosity, he hoped that similarly inquisitive persons would find his observations interesting. Perhaps such discoveries might also earn him a place in history as one of the pioneers of the microscopic world. This monumental letter is dated 17 September, an event worthy of commemorating.

But his letter announcing this discovery caused widespread doubt at the Royal Society and many members refused to believe in the existence of van Leeuwenhoek’s microscopic creatures. However, Robert Hooke, Curator of Experiments at the Royal society, repeated the experiment using his own microscopes, and was able to verify van Leeuwenhoek’s observations and confirm his discoveries. These letters and experiments were all published in the Royal Society’s journal Philosophical Transactions.

That is why 17 September was chosen as the day to celebrate the huge impact and variety of microorganisms. To reflect that microbiology has from the very beginning, been a collaborative field. Microbiology has involved international cooperation; correspondence, experiment reproducibility, peer review and publication since 1683.

The Federation of European Microbiological Societies (FEMS), the European Academy of Microbiology (EAM) and the Portuguese Society for Microbiology are working to establish 17 September as International Microorganism Day, an annual celebration of microbiology. 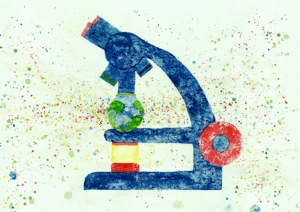 The FEMS Team, which is based in Delft prior and after the current SARS-CoV-2/COVID-19 pandemic, works behind the scenes to deliver the FEMS 2020-2024 Strategy.

The section #MicrobiologyIsEverywhere, acknowledges that microbiology knows no borders, as well as the fact that microbiologists are everywhere and our FEMS network extends well beyond Europe. This blog entry type accepts contributions from excellent blogs translated into English. Regional stories with global relevance are also welcomed.

This blog entry has been translated into: